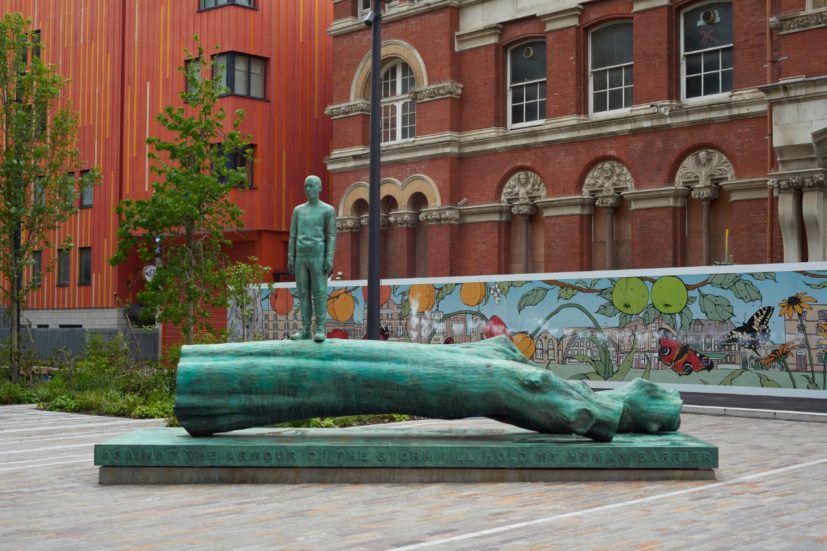 The bronze artwork was dedicated on 27 November, 2018, in the year that marks the centenary of the Armistice and the end of the First World War. But the sculpture has been commissioned to commemorate all the lives that have been affected by war and conflict around the globe, including the lives of members of the armed forces, civilians, refugees and others.

The memorial’s design depicts an anonymous figure of a youth standing on a giant, fallen ash tree. It bears the inscription “Against the armour of the storm I’ll hold my human barrier” – a line from a World War Two poem by Hamish Henderson.

Artist Kenny Hunter said: “My ambition was to make a memorial for Walworth Square that was open, unsentimental and able to express human endurance in traumatic circumstances.”  He also noted, “Essentially this monument speaks not only of endurance but of the imbalance in scale between the individual life lived and the destructive transitions of history.” The artist indicated that the fact that the tree is lowdown, horizontal, as opposed to most vertical monuments or public sculpture, encourages touch and connection.

Councillor Peter John, Leader of Southwark Council, said: “It is beyond important to remember the devastating impact wars and conflicts have on people, from those who make the ultimate sacrifice for their country, to the families they leave behind and the communities who are displaced, driven from their homes or living under the constant threat of attack.”