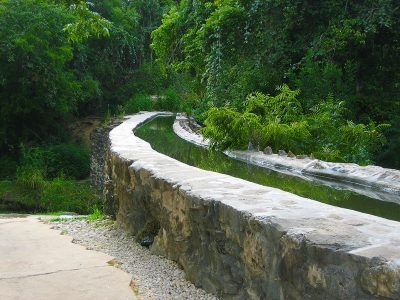 You can still observe traces of San Antonio’s elaborate colonial-era irrigation system of dams, gates and canals. Together, these are known as known as acequias (pronounced a-SAY-key-as.) They irrigated the labores (pronounced la-BORE-ays, meaning fields) and their locations influenced the development of other infrastructure such as roadways, which often followed their wandering paths.

The term itself is derived from the Arabic word al-saqia, or ditch. At least one acequia, the Principal or the San Pedro, was complete within two weeks of the earliest settlers’ arrival in 1718. There are seven acequias, but you may encounter:

The Acequia Madre de Valero was built from 1724 to 1744 to supply water to the Mission San Antonio de Valero (the Alamo) and in its heyday was about 10 miles long. Sections of the Acequia Madre de Valero are visible in the vicinity of the Mission Trails hike-and-bike trail, can be seen within HemisFair Park and the elongated fish pond behind the east wall of the Alamo chapel. The latest archeological discovery is parts of the acequia in Brackenridge Park, just east of the river, South of Hildebrand Ave., near the zoo.

The San José Acequia was completed around 1730. In addition to providing irrigation for crops, it supplied water to the mission’s cattle and to a mill constructed on mission property circa 1790. Remnants of the mill were discovered by archeologists in the 1930s. The acequia was prone to washouts at its diversion dam and was abandoned after the Civil War, though a reconstruction of the waterwheel mill is located along the north wall of the mission.

Construction of the Espada Dam, Acequia, and Aqueduct began shortly after the mission’s relocation from East Texas in 1731. Espada dam, constructed of limestone and mortar, is the city’s only Spanish Colonial dam that is still functional. The aqueduct also still exists.

Learn about the Acequias built to support life in the San Antonio Missions: