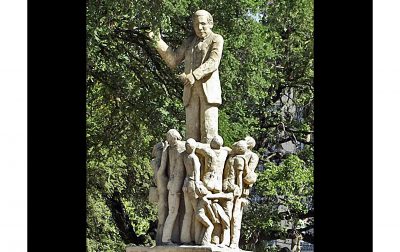 The statue of the founder and long-time president of the American Federation of Labor was commissioned by the AFL-CIO in 1982 to celebrate a national convention that was being held in San Antonio. The city approved a small bust on a pedestal and was surprised — and horrified — to be presented with a 15-foot-tall folk art style statue of the labor leader wielding a contract, surrounded by twelve very small but very enthusiastic workers. The workers were described as “looking like Lilliputians attacking Big Brother,” probably not the impression that artist Betty Jean Alden intended to convey. Gompers proportions are out of whack: a huge head, tiny hands and virtually no neck. It is actually scary.

The statue is made of “shellcrete,” a concrete-like mixture made from oyster shells and sandstone. It lacks the protective coating (typically stucco) that is used with this material, and as a result, a 1993 study noted, is “etched and pitted or otherwise corroded.”

Gompers only connection with San Antonio is that he died here, in 1924. Gompers, then 74, was attending a labor meeting in Mexico City when his diabetes and heart failure caught up with him. He expressed a desire to die on American soil and was put on a train for the journey north. He made it as far as San Antonio and died at the St. Anthony Hotel.

It’s a pity the statue is so laughable, as Gompers was a tireless fighter for worker’s rights, something we are celebrating this Labor Day weekend. If the statue itself does disappear in the Alamo Plaza reshuffle, we hope there is a way to preserve the sentiments expressed on the plaque on its base: