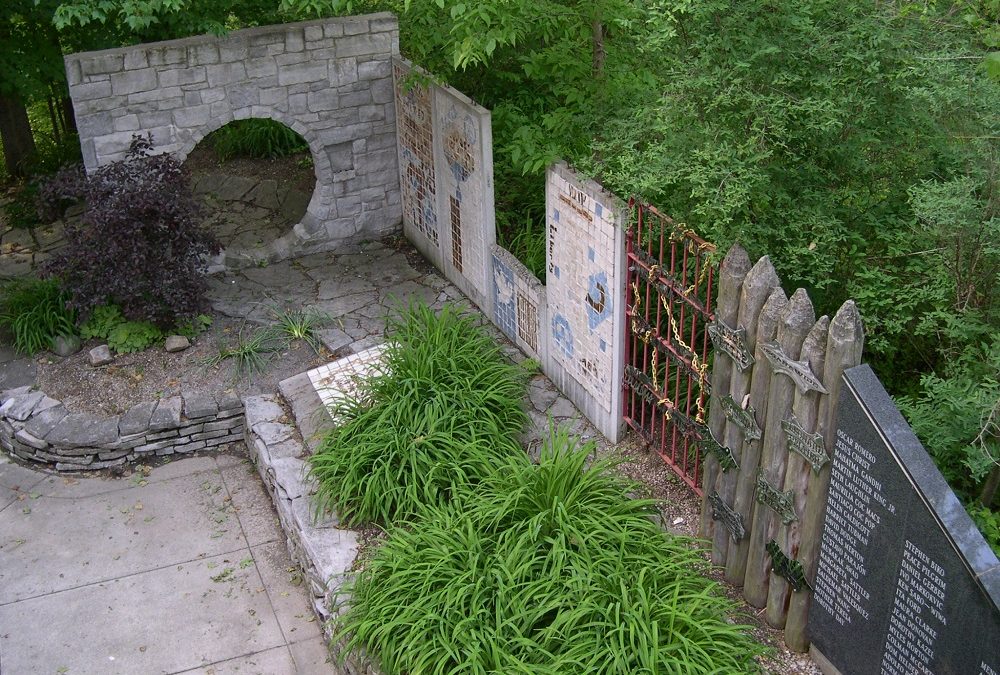 Although the headline highlights the Peace Wall/Moon Gate, this entry actually features a plethora of peace installations in the Honda Outdoor Sculpture Garden surrounding the Lion and Lamb Peace Arts Center at Bluffton University (formerly Central Mennonite College) located in the middle-of-nowhere on I-75 between Toledo and Dayton. It was dedicated in 1997. It’s worth the trip.

As explained by the university, Peace Wall and Moon Gate, by Jon Barlow Hudson (installed in 1994), replicates the Berlin Wall, a prison wall, a stockade wall and a memorial wall as an interactive art experience representing how we close people out, hold them in or immortalize them with walls of various kinds. On the stockade, prison and memorial wall sections are the names of those who have spent their lives working for peace and justice. Some have died as a result, some have been imprisoned but all, regardless of the sacrifice, have been committed to working for peace and justice around the globe.

The 800 four-inch graffiti tiles on the Berlin Wall were designed by Lima Senior High School art students under the direction of art teacher and Bluffton graduate student Lisa Arnett Carver. The circular shape of the moon gate represents unity and completeness entering our lives. Passing through the moon gate is a symbolic gesture of refusing to allow walls to separate us from others.

The names on the memorial wall include some famous names (Jesus, Gandhi, Mother Teresa, Martin Luther King, Jr., Thomas Merton, Dorothy Day, Steven Biko); some not-so-famous (such as Seth Laughlin, a Quaker who refused military service during Civil War and was arrested, tortured, and died in prison) a several Mennonites featured in the Martyr’s Mirror, a 1660 book telling the stories of Christians who who suffered and died for the testimony of Jesus.

The university describes Peacesounds is a large wind chime that stands in Riley Court at the top of the path that winds down to the peace arts center. The 10-foot-high, stainless-steel edifice was created in 1989 by Jaye Bumbaugh, a 37-year veteran of Bluffton’s art faculty. The multicolored tubes-representing different countries-produce gentle, muted tones that remind visitors of the possibilities for living a peaceful, harmonious existence.

Jonah and the Whale by faculty-artist Gregg Luginbuhl re-creates Jonah’s deliverance from the whale as an acrobatic resurgence, a kind of spiritual transformation. He shows Jonah moving through a series of stages, from disobedience and desperation to spiritual rejuvenation, with the hope that viewers will find comparisons to Christ’s crucifixion and resurrection. Surrounded by stone seats, visitors are invited to sit and think about their own experiences of transformation from chaos to peace. The sculpture was installed in 1994.

Peace House by artist Jack Mann is a stainless steel sculpture that suggests some peaceful and not-so-peaceful meanings of the word “home.” A nest of birds with a cat hovering below. A haven where children create and act out their dreams. A place where everything is turned upside-down. Installed in 1994, Peace House invites those whose faces are reflected in the sculpture’s mirror-finish to think about “home” and to place within one of the four rooms something from their world that can make Peace House a personal experience.

Not part of the Honda Garden but rather along the Little Riley Creek is a configuration of circular granite stones. Designed by Bernadette Amore and Woody Dorsey to be a setting where constructive dialogues can occur, Peace Thrones is modeled after three thrones once created for chiefs of three warring tribes. As the story goes, three aboriginal tribes were at war with one another. After many years, with no tribe emerging victorious, a common area was built where the three leaders could engage in dialogue. Peace Thrones consists of three granite discs, in black, red and white, equidistant from one another—an arrangement with no social hierarchy.

This last piece is also outside the bounds of the peace garden. As the university explains, Unveiled in 1996, Paul Granlund’s Constellation Earth is a bronze sculpture that illustrates the unity of all human races and people. It is a replica of a Granlund’s original sculpture that was installed in Peace Park in Nagasaki, Japan. The sculpture displays seven human figures held together by an intangible force. For Granlund, the sculpture is a microcosm of the universe. Each figure represents a different continent, each continent represents a planet, and each planet is a star that, with the rest, forms the Constellation Earth. The bronze medium suggests strength and timelessness. The nude figures are all the same color and are bound by the same substance crucial for human existence. In depicting the figures like this, Granlund hopes to break through the superficial constructions of humans.