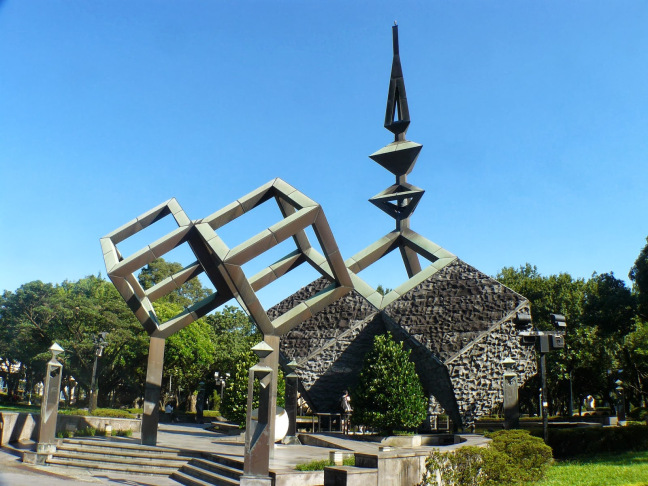 The 228 Peace Memorial Park is a historic site and municipal park containing memorials to victims of the February 28 Incident of 1947, including the Taipei 228 Memorial that stands at the center of the park and the Taipei 228 Memorial Museum, housed at the site of a former radio station that operated under Japanese and Kuomintang rule. The National Taiwan Museum stands at the park’s north entrance. The park also has a bandshell and exercise areas.

The 228 Massacre Monument was designed by Taiwanese architect Cheng Tzu-tsai. He describes the symbolism of the monument thusly:

“The basic design element is the cube with six equal square sides and 8 corners. We let the cube stand on a corner to emphasis the Taiwanese people want to stand on their own feet and be an independent country. A single cube cannot stand alone, but three can to symbolize that by working together we will succeed. The main body of the design has four cubes to represent four ethnic groups on Taiwan.”

“The peaceful water of the monument is to soothe suffering souls. The low sounds of the water falling into the well sounds like people in mourning. The hand imprints signify the many who place their hands on the monument well in deep grief and sorrow, day and night.”

The lengthy inscription tells the story:

In 1945, when the news of Japanese defeat and surrender reached Taiwan, the Taiwanese people were overjoyed that the unfair and unjust colonial rule had come to an end. But soon the Taiwanese people were surprised to find that Chen Yi, the newly appointed Governor of Taiwan had no understanding of Taiwan and its people. He instituted unfair policies that discriminated against the Taiwanese people. To make matters worse, Chen and his officials were undisciplined and corrupt. As a result, production and consumption lost balance, and unemployment and inflation skyrocketed. The people’s resentment was mounting and fast reaching a boiling point.

On 27 February 1947, while investigating sales of illicit tobacco on Yen-Ping North Road, Taipei, officials of the Taiwan Tobacco and Wine Monopoly Bureau beat up and injured a female vendor. Then they opened fire, killing an innocent bystander. The public was outraged. The next day, citizens of Taipei took to the streets and demonstrated. They marched to the Governor’s Office and appealed for the immediate punishment of the murderers. In response, shots were fired at the demonstrators and several were killed or wounded. This triggered a furious island-wide protest and struggle against the regime. In order to resolve the disputes and to calm the people’s growing anger, leaders from communities around the island began setting up committees to mediate between the protesters and the government. At the same time, they demanded immediate political reform.

Chen Yi was insensitive and responded with highhandedness and treachery. On the one hand he negotiated with the committees and, on the other, he treated the leaders as if they were thugs and traitors and asked Nanking for troops. Upon receiving Chen’s report, the Chairman of the National Government in Nanking, Chiang Kai-shek, immediately ordered the dispatch of troops. On 8 March 1947, the 21st Division under the command of General Liu Yu-ching landed in Keelung. On 10 March, martial law was declared in the whole of Taiwan. Ke Yuan-fen, the chief of staff of the Taiwan Garrison Command; Shih Hong-hsi, the commander of Keelung District; Peng Meng-chi, the commander of Kaoshiung District; Chang Mu-tai, the commander of a military police regiment; and others started brutal “cleansing of the countryside.” During the subsequent crackdowns and purges, many innocent people were implicated. Within a few months, the number of deaths, injured and missing persons reached tens of thousands. Keelung, Taipei, Chiayi, and Kaohsiung suffered the highest casualties. This incident has become known as the 228 Massacre.

Since then, the Taiwanese people were under prolonged martial law for nearly half a century. Both those in the government and the general public were forcibly silenced; no one dared touch upon this taboo subject – the 228 Massacre. However, the grievances and resentment against this atrocity continued to rankle and it was felt necessary to confront this problem openly before healing could take place. Mistrust between Taiwanese and mainlanders, and the argument on whether Taiwan should declare independence or be united with China, have become hot issues with potentially worrisome implications. After the lifting of the Martial Law in 1987, people in all walks of life feel that there would be no hope for peace and harmony unless the deep-rooted malaise was properly addressed. Accordingly, investigation and research into the 228 Massacre were started; the Head of State issued a public apology; the victims and their families were compensated; and a monument was erected. However, the task of healing a serious trauma in a society must depend on the whole-hearted collaborative effort by all its people. We have, therefore, inscribed these words on this memorial plaque in the hope of consoling the spirits of the victims and comforting their grieving families. It is also hoped that these words will serve as a warning and a lesson to all Taiwanese compatriots Henceforward, we must be one, no matter which communal group we belong; we must help each other with compassion and treat each other with sincerity; we must dissolve hatred and resentment, and bring about long lasting peace. May Heaven bless Taiwan and keep it evergreen.