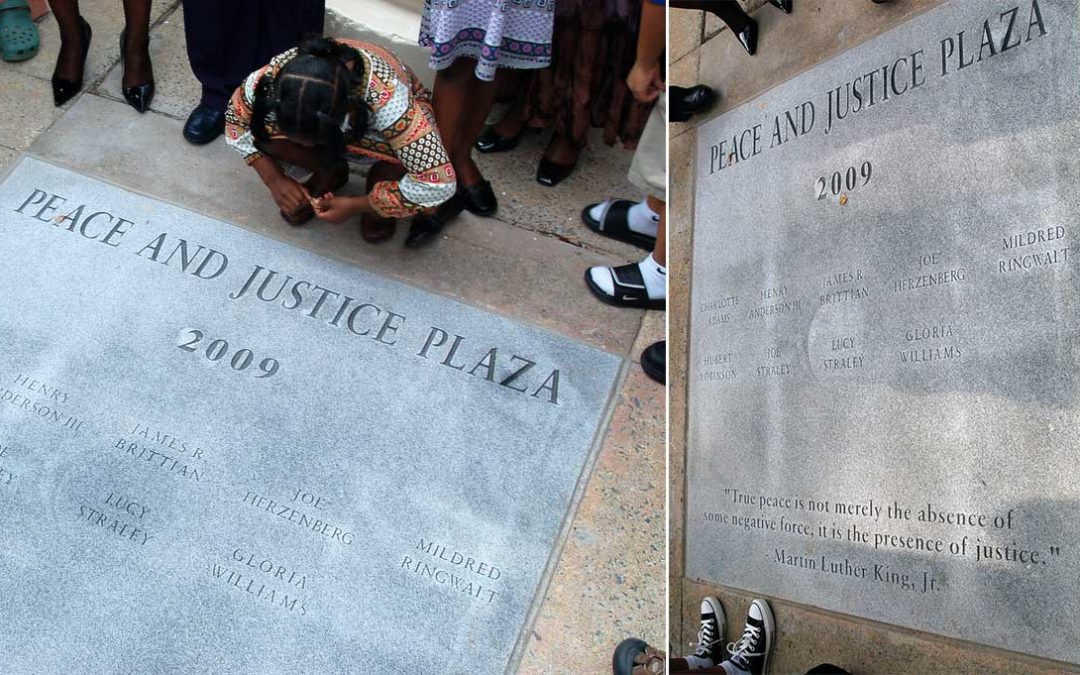 In September, 2009 Chapel Hill renamed its historic Post Office Plaza (which also includes the county courthouse) as Peace and Justice Plaza, and marked the occasion with a granite plaque, embedded in the pavement, containing the names of nine local champions of peace & justice. Since the original dedication there have been 8 more names added: four in 2011 and two each in 2011 and 2015.

At the bottom on the memorial is a quote from Dr. Martin Luther King, Jr.: “True peace is not merely the absence of some negative force, it is the presence of justice.”

The idea arose in 2006 when several city council members proposed naming the plaza after Joe and Lucy Straley and Charlotte Adams, who were active in civil justice issues and spent countless hours in front of the Old Post Office collecting signatures and holding demonstrations and vigils. After public input, the council decided to broaden the concept to honor more peace & justice activists.

The city explains, ” The Peace and Justice Plaza honors the energy and spirit of the thousands who have stood in the shadow of the Courthouse and exercised their rights to assembly and speech and have spoken out on issues as diverse as the Vietnam War, environmental justice, women’s rights, gay rights, the death penalty, and racial justice. “

In 2021 a series of three banners were installed at the old Post Office on the square. Designed by Victoria Primicias, they look like old post cards and incorporate social justice symbols. The postmark, March 19, 1964. commemorates a leaflet about racial justice that was written by participants in the Holy Week Fast and distributed to passerby in front of the Post Office.

There is a very good website about the plaza.