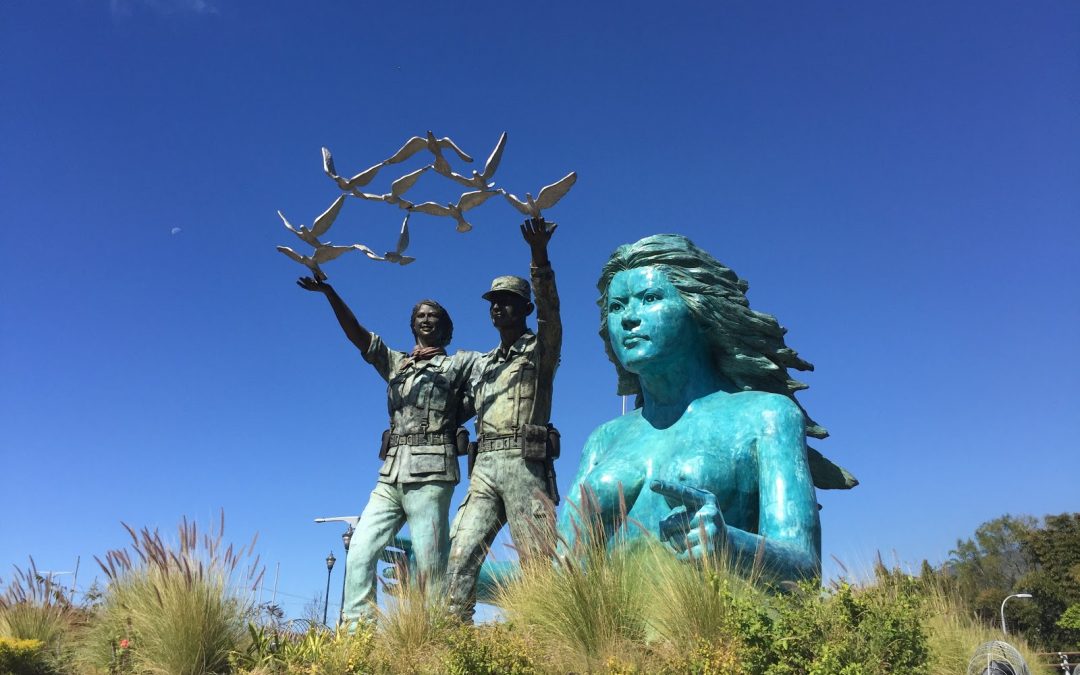 This park is a monument to the Chapultepec Peace Accords, which brought peace to El Salvador in 1992 after more than a decade of civil war. It was opened in 2017.

A landscaped path — el camino a la reconciliación, the road to reconciliation — leads from the parking areas up to a tiered plaza.  At the first level, a long, narrow plaque contains the signatures of those who signed the 1992 Peace Accords, including representatives of the government and the FMLN ( Frente Farabundo Martí para la Liberación Nacional), and UN General Secretary Boutros Boutros-Ghali.

Steps lead up to the next level which features bronze statues of a female guerrilla fighter and a male soldier walking arm in arm, striding forward toward peace. Their arms are raised as they release a flock of bright aluminum doves.  Behind them is the bright turquoise torso of a woman.  She is unclothed except for the leaves vines near her waist, which blend with the live plants that surround her.  Her name is la Mater Civis, which means citizen. She represents the Salvadoran people, connected to the earth and the sea.  On her right hand she wears a ring, showing her commitment to peace.  Her left index finger points the way to a peaceful future.

The upper tier of the plaza features a mural entitled Huellas del Jaguar, Footprints of the Jaguar.  The mural weaves together figures of Salvadoran history and Mayan symbols.  There is a key to assist in decoding the images.

The design and implementation was carried out by the Directorate of Inclusive Cities, part of the Ministry of Public Works, who worked mainly with donated materials, volunteers and prisoners on work release. The mural was modeled by students from the University of El Salvador.

The blue woman has been controversial. Even the designer, sculptor Napoleón Alberto, was displeased with how it is presented. She has been called La Pitufina, the Smurfette, for her blue color. Several artists noted that most of the monuments around the capital are “horrible and frightening” because politicians end up imposing their aesthetic tastes.