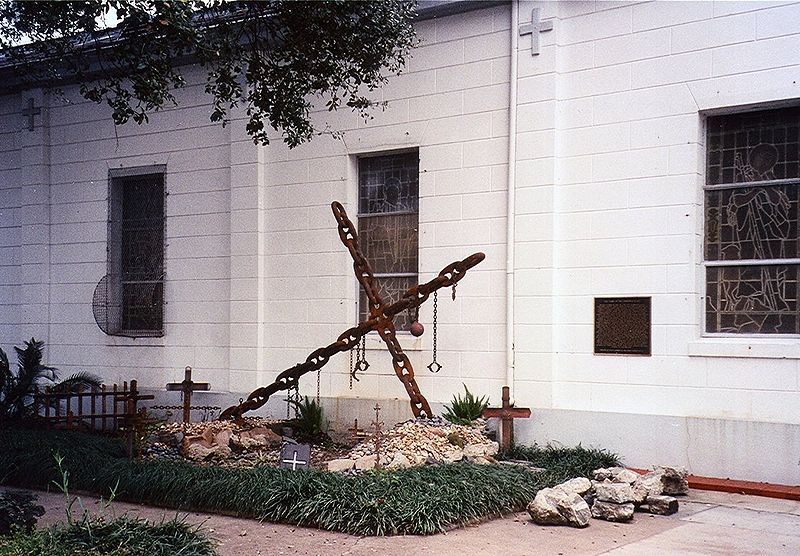 Founded in 1841, St. Augustine is the oldest African-American Roman Catholic parish in the United States. The church was founded by free people of color, who purchased additional pews for the enslaved. This memorial, which does not contain any actual remains, was installed in 2004 in a garden plot at the side of the church.

The following text is from this plaque installed by the St. Augustine parishioners to commemorate the “Tomb of the Unknown Slave.”

“On this October 30, 2004, we, the Faith Community of St. Augustine Catholic Church, dedicate this shrine consisting of grave crosses, chains and shackles to the memory of the nameless, faceless, turfless Africans who met an untimely death in Faubourg Treme. The Tomb of the Unknown Slave is commemorated here in this garden plot of St. Augustine Church, the only parish in the United States whose free people of color bought two outer rows of pews exclusively for slaves to use for worship. This St. Augustine/Treme shrine honors all slaves buried throughout the United States and those slaves in particular who lie beneath the ground of Treme in unmarked, unknown graves. There is no doubt that the campus of St. Augustine Church sits astride the blood, sweat, tears and some of the mortal remains of unknown slaves from Africa and local American Indian slaves who either met with fatal treachery, and were therefore buried quickly and secretly, or were buried hastily and at random because of yellow fever and other plagues.

Even now, some Treme locals have childhood memories of salvage/restoration workers unearthing various human bones, sometimes in concentrated areas such as wells. In other words, The Tomb of the Unknown Slave is a constant reminder that we are walking on holy ground. Thus, we cannot consecrate this tomb, because it is already consecrated by many slaves’ inglorious deaths bereft of any acknowledgement, dignity or respect, but ultimately glorious by their blood, sweat, tears, faith, prayers and deep worship of our Creator.”