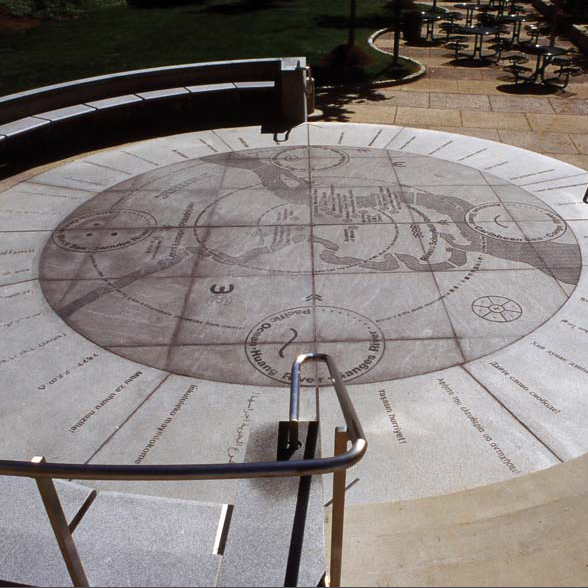 Dedicated on the campus of the Community College of Philadelphia in 1994, The Freedom Ring celebrates the theme of freedom as it relates to peoples and cultures migrating across oceans in pursuit of refuge in Philadelphia. A “cosmogram” 24-feet in diameter, the artwork was fabricated from over 5 tons of Pennsylvania black and midnight gray granite, with hundreds of sandblasted letters. The circumference of the ring spells out “Let Freedom Ring” in 36 languages from from Armenian to Zulu, nearly all of which, according to the college, are or have been spoken by students and faculty. There are 12 “cultural water routes” showing the many passageways taken by immigrants coming to United States and Philadelphia. The map at the center of the artwork marks the 14 historical sites in Philadelphia where people gathered in search of freedom (among them, Independence Hall, the Mother Bethel A.M.E. Church, the Quaker Meeting House and the Mikveh Israel Synagogue), and incorporates various visual symbols that suggest layers of mythology, religion and culture. A “song line” containing lyrics of freedom from 12 distinct songs is also woven around the ring’s center. The college announced, “We hope this handsome sculpture will be used as a gathering place and outdoor stage as it calls attention to the social/political, cultural/historical metaphors incised into its granite facade.”