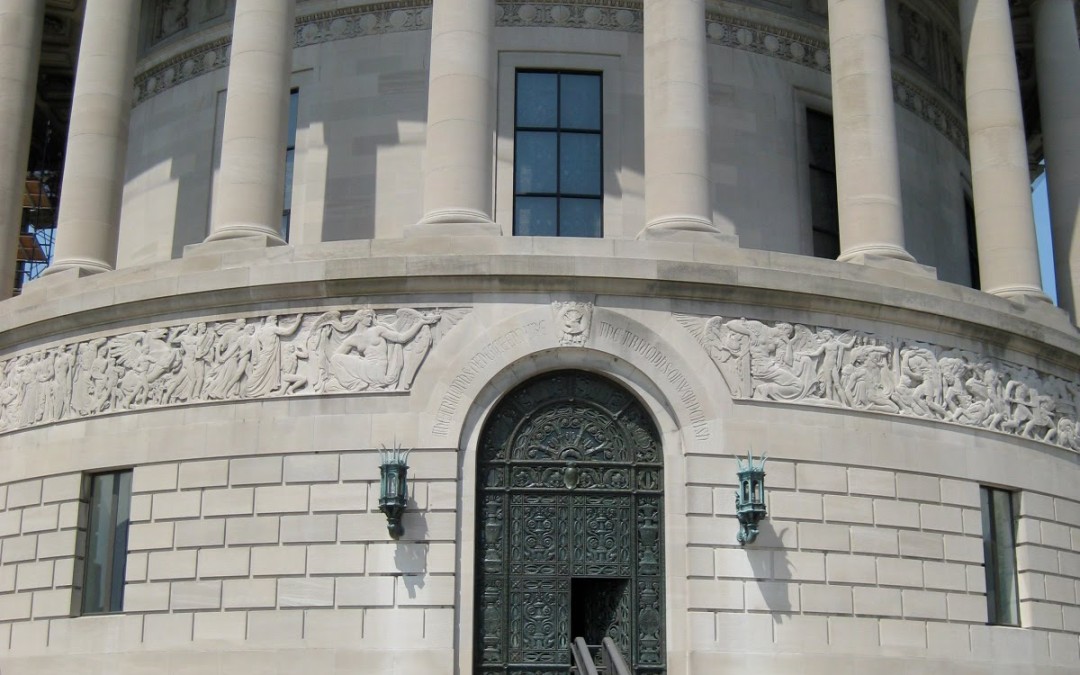 This Beaux Arts-style domed building, which also serves as the Elk’s headquarters, was built in 1926. The two friezes, composed of more than seventy figures carved in low relief, are just above a legend in Gothic script that reads The Triumphs of Peace Endure—The Triumphs of War Perish, which is carved above the great bronze doors of the main entrance. The Terror of War frieze is to the right of the doors and The Glory of Peace is to the left.

From James L. Reidy, Chicago Sculpture:  “The introductory motive in the Glory of Peace is the heroic winged figure of The Spirit of Peace giving blessing to the group of mother and children about to lay floral offerings upon her altar, while in her shadow repose Virtue and Contentment, hovered over by chanting angels. Following to the right is the Sower, the Reaper, and the Husbandman with his ox and plow. Now follows a series of themes symbolizing the four cardinal principles of the Order of Elks: Charity, offering food and shelter to life’s unfortunates and warding off Hunger and Despair. Justice is symbolized in the enthroned figure of Justice before whom Innocence pleads her cause, while Nemesis with fiery sword lays her avenging hand upon the evil-doer. Brotherly Love is symbolized in the two powerful men who are relieving their heavily burdened brother, while another is giving succor to him whom illness has afflicted. Fidelity is depicted in the group by a vigorous man standing steadfast by his mate, spurning Temptation, shown in the siren holding aloft the brimming cup that cheers, and warding off Adversity and gaunt Poverty. Following this is Pegasus, the symbol of creative inspiration, surrounded by the Bearer of the Sacred Fire and the Singers of the laden horn of plenty. The climax is reached in the group of the Human family surging onward to the self-revealing figure of Truth and the Higher Life.” The Elks National Veterans Memorial is located at the intersection of Sheridan Road and Diversey Parkway in Chicago’s Lincoln Park neighborhood.