Monday’s Monument: The Gilt of Cain, City of London 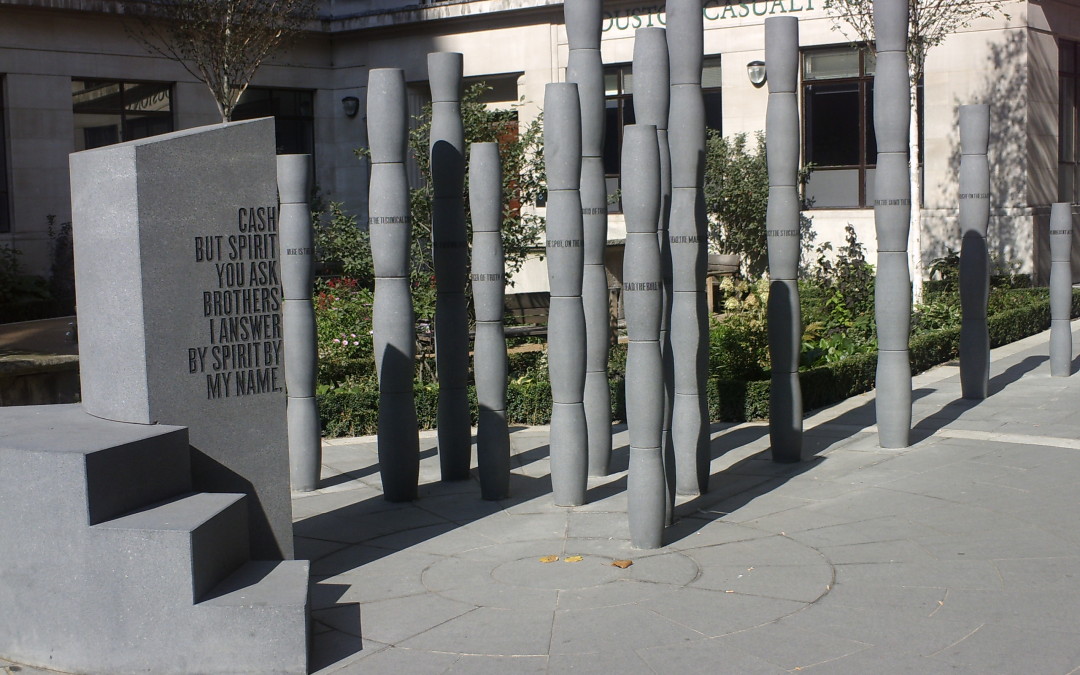 This powerful sculpture commemorates the abolition of the transatlantic slave trade in 1807, which began the process of the emancipation of slaves throughout the British Empire. Fen Court in the City of London is the site of a churchyard with a strong historical connection to the abolitionist movement of the 18th and 19th centuries. The Rev John Newton, a slave-trader turned preacher and abolitionist (he’s the one who wrote “Amazing Grace”), was rector from 1780 – 1807. Newton worked closely alongside the famous abolitionist William Wilberforce.

The granite sculpture is composed of a group of columns surrounding a podium. The podium calls to mind a church pulpit or slave auctioneer’s block; the columns evoke stems of sugar cane and are positioned to suggest an anonymous crowd or congregation gathered to listen to a speaker. Extracts from Lemn Sissay’s poem, ‘Gilt of Cain’, are engraved into the granite. The poem  weaves the coded language of the City’s stock exchange trading floor with biblical Old Testament references. The monument was unveiled by Archbishop Desmond Tutu in 2007 on the 200th anniversary of the abolition of the slave trade.

Here is the ask price on the closed position,
history is no inherent acquisition
for here the Technical Correction upon the act,
a merger of truth and in actual fact
on the spot, on the money – the spread.
The dealer lied when the dealer said
the bull was charging the bear was dead,
the market must calculate per capita, not head.

And great traders acting in concert, arms rise
as the actuals frought on the sea of franchise
thrown overboard into the exchange to drown
in distressed brokers disconsolate frown.
In Accounting liquidity is a mounting morbidity
but raising the arms with such rigid rapidity…
Oh the reaping the raping rapacious fluidity.
the violence the vicious and vexed volatility.

The roaring trade floor rises above crashing waves:
the traders buy ships, beneath the slaves.
Sway machete back, sway machete again
cut back the Sugar Rush, Cain.
The whipsaw it’s all and the whip saw it all
The rising market and the cargo fall
Who’ll enter “Jerusalem” make the margin call for Abel?
Who will kick over the stall and turn the table?

Cain gathers cane as gilt-gift to his land
But whose sword of truth shall not sleep in hand?
Who shall unlock the stocks and share?
Break the bond the bind unbound – lay bare
The Truth. Cash flow runs deep but spirit deeper
You ask Am I my brothers keeper?
I answer by nature by spirit by rightful laws
My name, my brother, Wilberforce.