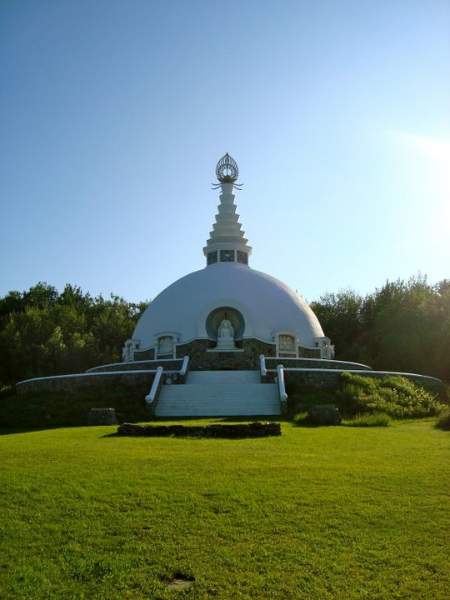 In 1978, Native Americans organized “The Longest Walk”: participants walked cross-country from San Francisco to Washington, DC. Accompanying them on their walk was a Japanese Buddhist Nun from the Nipponzan Myohoji order. Since then, Jun Yasuda has crossed the country four more times on foot and logged in several thousand additional miles for the cause of peace. She walks beating her drum while chanting a prayer for peace, Na-Mu-Myo-Ho-Ren-Ge-Kyo. In 1983 she was approached by Hank Hazelton, a long time activist for Native Americans, who offered her a parcel of land in Grafton, New York, for the purpose of building a “Monument for Peace.” In October 1985, work began on the structure soon to be called the Grafton Peace Pagoda. The Pagoda was completed and dedicated in the fall of 1993. Peace Pagodas are a symbol of non-violence for 2,000 years ago when the Emperor Ashoka of India was approaching after a particularly bloody battle by a Buddhist Monk who admonished him for his wrongdoings. Ashoka became a became a fervent believer in Buddhism, gave up his warlike ways and began erecting Peace Pagodas.