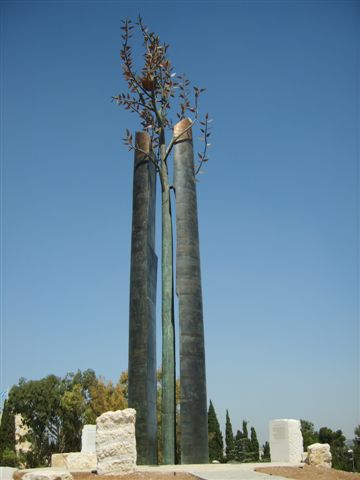 The gift of a Polish billionaire in 2008, the Tolerance Monument is an outdoor sculpture located in a park near Goldman Promenade in Jerusalem. Etched on a stone at the entrance to the park are the following words: “The monument is in the form of two halves of a broken column, which stand divided but still linked, on the ruins of a nameless and ageless temple. An olive tree grows in the middle of the split column and with its leaves seeks to encompass and shade both halves. The tree enables the two parts of the column to link together in symbolic coexistence. It cannot be known when the break will heal, when the two sides will grow back together but it can be seen that between the branches of the olive tree a new seed is sprouting, a golden grain of tolerance.” The monument is situated on a hill marking the divide between Jewish Armon HaNetziv and Arab Jabel Mukaber, just outside the United Nations headquarters.