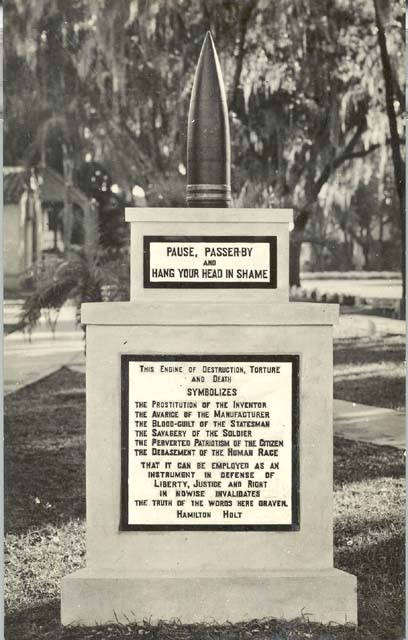 This monument, featuring a German artillery shell, was erected on the grounds of Rollins College on November 11, 1938. In March of the next year Rollins hosted a world peace conference (along with the Church Peace Union and the World Alliance for International Friendship Through the Churches) attended by more than 900 delegates. The monument was vandalized in 1943. The German shell on the stone pedestal was destroyed, but the plaque survived and put in storage. It was rediscovered in the 1980’s and rededicated it in 1988. The Plaque bears this inscription: Pause, passerby and hang your head in shame. This Engine of Destruction, Torture and Death Symbolizes: The Prostitution of the Inventor, The Avarice of the Manufacturer, The Blood-guilt of the statesman, The Savagery of the Soldier, The Perverted Patriotism of the Citizen, The Debasement of the Human Race. That it can be Employed as an Instrument of Defense of Liberty, Justice and Right in Nowise Invalidates the Truth of the Words Here Graven. —Hamilton Holt Holt, president of the College at the time, was a well-known magazine editor, peace and civil rights activist and education innovator.