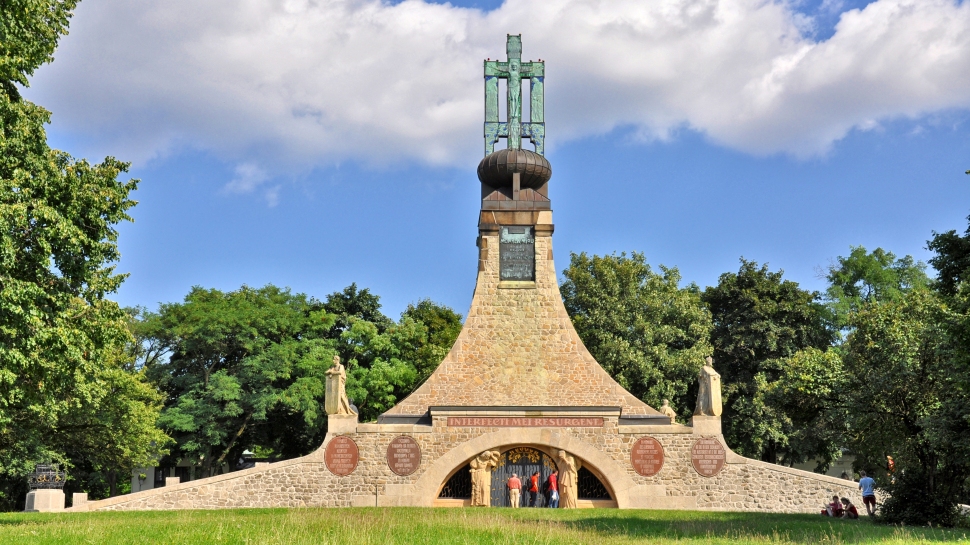 The Cairn of Peace was built to honor the victims of Napoleon’s victorious battle over the Austrians and Russians near Austerlitz, fought on December 2, 1805. It was the initiative of a priest, A. Slovák, to create a pious “place of light” from the center of a one-time battlefield. The structure incorporates a chapel and crypt. It was intended to be a a somber testament to the price of war for the victor, vanquished and local population alike. Construction began in 1910 but because of the disruption caused by World War I it was not completed until 1923. Four shield bearers, one at each corner of the cairn, represent not only the three combatant nations but also the local Moravian population who had the misfortune of having the battle take place on their farms and homesteads. Flanking the doors to the chapel are allegorical figures of Grief and Woe which take the form of a mother in mourning and a wife or sweetheart waiting for her man to return. In the floor of the chapel there is a crypt where human remains that are found by archaeological digs in the area of the battle field are periodically interred.