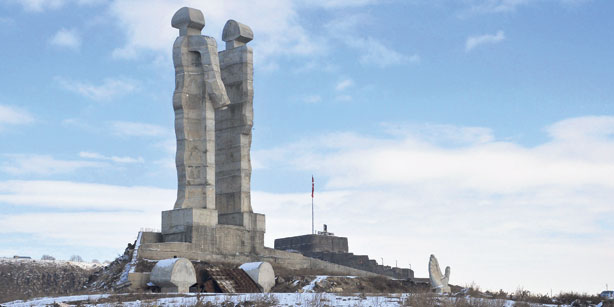 It looked like a good sign when a former mayor of Kars, Turkey commissioned sculptor Mehmet Aksoy  to build his “Monument to Humanity”: two large figures—a divided human—that stood almost 100-feet tall and included a giant hand, palm open and facing toward Armenia. “The hand will serve as a call for amity and humanity,” Askoy told the New York Times. “We Turks and Armenians are sisters and brothers,” he said said to the Turkish Daily News. “Now, it is time for both of us to open our hearts to each other and heal our traumas.” Turkish President Erdogan disagreed. In 2011 he called the still unfinished monument a “monstrosity” and a “freak.” He also expressed concern that it was in a protected historical area because of its proximity to  the tomb of Muslim scholar Hasan Harakani. Local authorities, a new lot not at all enamored of the statue, tore it down. In March 2015 a court ordered Erdogan to pay Aksoy $4,000 in compensation, but now prosecutors are seeking to put the artist in prison for 56 months because he insulted the president. Divided for generations by a dispute over genocide in the early 20th century, relations between Turkey and Armenia have always been difficult. Turkey’s border with Armenia was closed in 1993 when Turkey broke off diplomatic ties, backing Azerbaijan in a dispute over a piece of land between the two countries at the time.