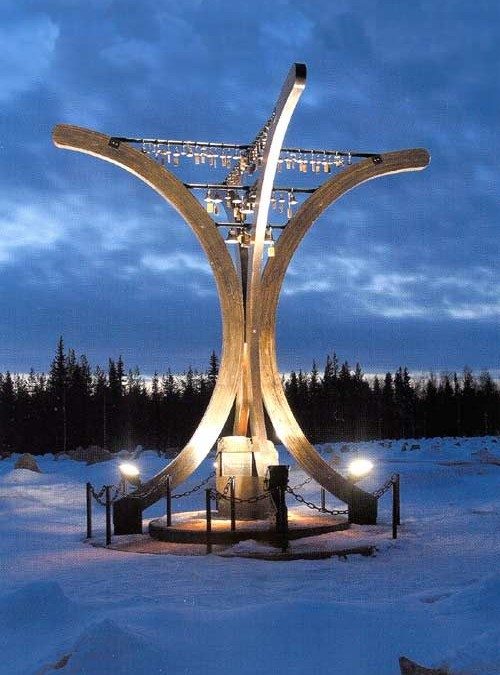 The Winter War began with the Soviet invasion of Finland on 30 November 1939, and ended with the Moscow Peace Treaty on 13 March 1940. The League of Nations deemed the attack illegal and expelled the Soviet Union from the League on 14 December 1939. Finland ceded territory representing 11% of its land area and 30% of its economy to the Soviet Union, but Soviet losses were heavy, and the country’s international reputation suffered. This monument was dedicated in 2003. Stones standing on an area covering almost three hectares (7 acres) represent the number of soldiers who died in the Winter War battles of Suomussalmi. This stone field reminds us of the human suffering which the war brought. It impels the viewer to reflect on the mindlessness of war. The central monument “Wide Embrace” stretches its protective wings over the silent field of stones. The monument contains 105 brass bells, one for each day of the Winter War. When the wind blows the bells sound a quiet message of the mindlessness of war. A text on the central monument reads, “Although man dies – his memory lives on.” The Winter War Monument is a powerful message for peace. It communicates to its viewer the idea that war is a horror that no-one alive today need experience. The idea of peace is particularly stressed by the fact that a joint monument has been built to commemorate the dead of two nations — Finland and Russia — which fought against each other.