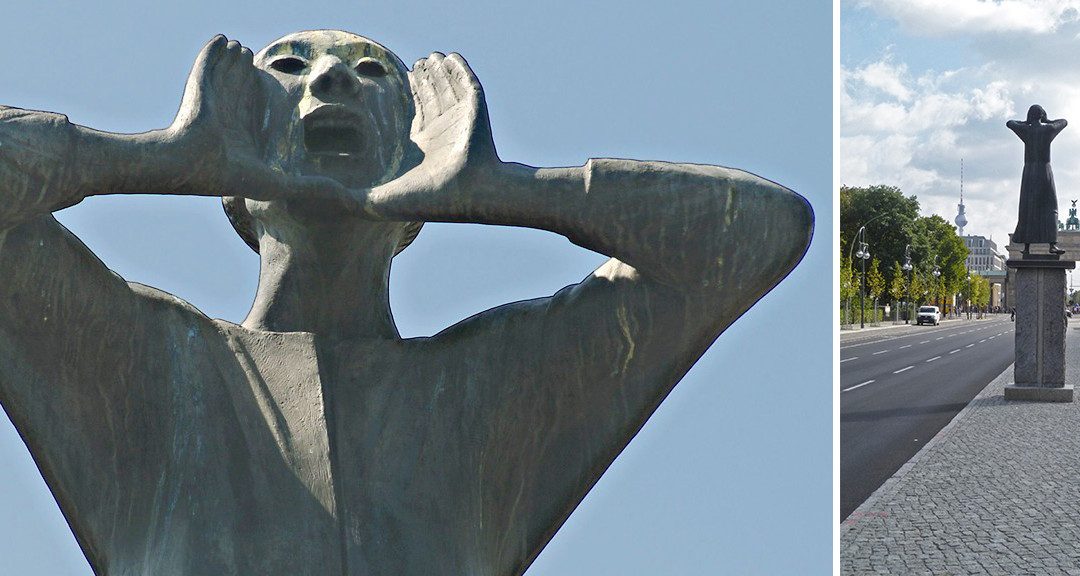 “The Caller” is in the middle of Straße des 17. Juni, facing the Brandenburg Gate. A quotation from the Italian poet Francesco Petrarch is inscribed on the base: “I wander through the world and cry ‘Peace, Peace, Peace.’ This bronze sculpture is 3 meters tall and was created by the sculptor and graphic artist Gerhard Marcks. The original sculpture was cast in 1967 for Radio Bremen. This casting was commissioned in May 1989, just a few months before the fall of the Berlin Wall, by a private foundation, with the intent of erecting it in this location. There is also a version in Perth, Australia, dedicated to victims of torture.

This month we will stay in Berlin, a city that has had to confront its history in the Holocaust and the Wall, and figure out how to engrave both tragedies into the landscape. The fall of the Berlin Wall was an unambiguous event. The vast majority of Germans were elated and memorials were erected before the dust settled. Joy! Freude! The Peter Fechter Memorial Obelisk, commemorating a bricklayer who was shot and left to slowly bleed to death in the no-man’s-land between east and west, was erected in 1999, only nine years after the fall of the wall. Chunks of the Wall were shipped all over the world, in celebration; one is installed in front of the George HW Bush Presidential Library in College Station. It took longer for the Germans to figure out how to carve the Holocaust into tangible memory. Partly, this was because of the division of the country. Berlin, the (im)moral capital of Nazism, was not only itself divided, but was buried in East Germany, inaccessible to Westerners. More importantly, it took a long period of reflection, of soul-searching, of consultation with stakeholders, to figure this out. It took fifty years; two generations. Memorialization harder for perpetrators than it is for victims.