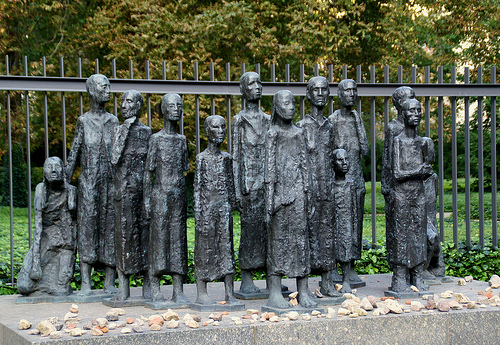 Große Hamburger Straße is in the Hackescher Markt district of Berlin. In the pre-war years it housed a Jewish cemetery, school and home for the elderly. On 11 March 1942, the SS ordered the school’s closure. Its doors were shut on 30th June and the Gestapo turned it – together with the neighboring Jewish home for the aged – into a transit camp for Berlin Jews destined for deportation. More than 55,000 Jews were deported from there to the extermination camps in “the east.” In 1943, the Jewish cemetery was destroyed on orders of the Gestapo. The Nazis desecrated the graves and turned the entire grounds into air raid shelters, the walls of which were reinforced with demolished gravestones. In April 1945, the authorities used the grounds as a mass grave for soldiers and civilians killed during Allied air raids. In the 1970s, East Berlin’s Department of Parks and Gardens removed the remaining Jewish gravestones as well as the wooden crosses marking the graves of air raid victims. Approximately 3,000 war victims (only 2,000 are known by name) were buried there alongside approximately 3,000 Jewish dead. In 1985 this group of figures by Will Lammert (German: Denkmal für die jüdischen Opfer des Faschismus) was installed next to a memorial stone outside the gates of the former Jewish Cemetery The sculpture was originally intended for the Ravensbrück camp memorial.