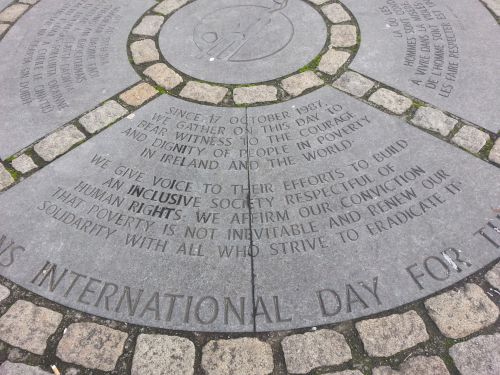 The World Poverty Stone is a commemorative stone marking the United Nations International Day for the Eradication of World Poverty. It is sited to the east of the Famine Sculptures on Custom House Quay in the heart of Dublin’s Docklands. This limestone memorial was commissioned as a gesture of solidarity with people living in poverty around the world. On the 17th of October 1987, in response to the call of Joseph Wresinski – founder of the International Movement ATD Fourth World – 100,000 defenders of human rights gathered in Paris to honor the victims of hunger, violence and ignorance, to express their refusal of extreme poverty and to call on people from all walks of life to unite to ensure respect for human rights. A commemorative stone proclaiming this message was inaugurated on this occasion on the Plaza of Human Rights and Liberties – where the Universal Declaration of Human Rights was signed in 1948. There are now over 30 replicas of the original stone now located around the world. These sites have become places of honor for people living in poverty in the world, places where people gather to reject the inevitability of poverty and social exclusion and places of friendship and solidarity where people from all backgrounds can gather together. Around the world, annual commemoration take place at the site of the stones to mark the 17th October UN International Day for the Eradication of Poverty.