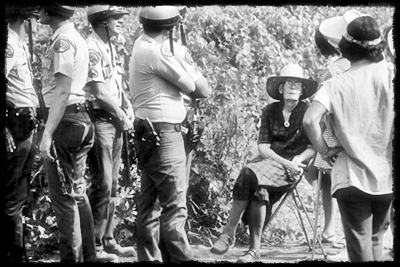 In October, 2015 Our Lady of the Lake University had a wonderful day-long forum about the activist, journalist and founder of the Catholic Worker Movement, Dorothy Day, jointly hosted by the Worden School of Social Work and the university’s new MFA/social justice program.   I was invited to speak for five minutes (five minutes!) about the third and last phase of Dorothy Day’s life, and specifically about Dorothy Day and Peace. — Susan Ives

The word – the one word – I want you to hold onto as I speak is integrity. Today, we simplify integrity’s meaning to mean honesty, but it comes from the same Latin root that give us the mathematician’s integer – a whole number – and integration – to make whole. Integrity is wholeness.

For Dorothy, there was no such thing as “a means to an end.” The means and the end were the same. As her protestant contemporary, AJ Muste said, “There is no way to peace. Peace IS the way.” And Gandhi: “BE the change you wish to see in the world. There was no such thing as the lesser of two evils. Evil was – evil. You could not fight yourself to peace. Peace was the only way to peace.

In 1911 the labor organizer Joe Hill wrote a song “the preacher and the slave,” that probably summed up pretty accurately how most people felt about religion at the time:

You will eat, bye and bye
In that glorious land above the sky
Work and pray, live on hay
You’ll get pie in the sky when you die (that’s a lie!)

But Dorothy didn’t buy into pie in the sky theology. She took the words of the Lord’s Prayer seriously: “Thy will be done on earth as it is in heaven.” As above, so below. God’s kingdom was one. Integrated. Whole.

And she took the words of the Sermon on the Mount seriously. To love your enemy, bless those who persecute you, turn the other cheek.

This was her integrity, her wholeness. Mercy, justice, peace – they were integrated — all inalienable parts of the whole.

And boy – did that get her into holy shit. Dorothy Day and the Catholic Worker movement were pacifist. The Church was committed to a doctrine of just war, first laid out in the Fourth Century. Wars could be justified, if they were fought for a just cause in a fair way. Dorothy didn’t buy into this. They would have liked her better if she did.

The first crisis came during the Spanish Civil War, 1936. This wasn’t a little local war. It was the pre-season game for World War II. The fascists – Franco, the military, and the Catholic church were on one side. The republicans – workers and assorted radicals — on the other. Some 2,000 priests and nuns were murdered, martyrs in the eyes of the Church. Christ does not call us to kill, Dorothy wrote. He calls us from the cross to suffer and die. She lost half of her financial support.

America was once again pro-war after the bombing of Pearl Harbor in 1941. The Catholic Worker urged young men to resist the draft . It advised Catholics not to buy war bonds. Subscriptions to the Catholic Worker fell by 75%.

During the Cold War, New York City held mandatory civil defense drills. Dorothy would not participate, saying she refused to be drilled into fear. Instead of going to a shelter, as directed, she and her Catholic Worker colleagues hung out on a park bench. She was arrested and jailed for five days.

She famously opposed the war in Vietnam – another war where her church saw the Catholics in South Viet Nam in a holy war against the godless communism of Ho Chi Minh. During Vatican II in 1965 she went to Rome and fasted and prayed for 10 days.  Here, I think, was when the church hierarchy began to listen to Dorothy Day. They began to see conscientious objection as a legitimate expression of Christianity. They began to see the seamless pro-life garment as not just being about abortion and euthanasia but also about war. The American Bishop’s letters about war and perhaps, even, perhaps the papal encyclical, Pacem in Terris, peace on earth – were influenced by this lay Catholic convert of impeccable integrity.

Pacifism – and non-violence – does not mean doing nothing. It is a particular way of resisting injustice. But that’s the 8 hour class, not the 5 minute talk. Dorothy Day took her theology of nonviolence to the Civil Rights Movement with Martin Luther King. She took her theology of nonviolence to the lettuce and grape fields –and to jail – with Cesar Chavez. She took it to her grave. It was her blessing to the peacemakers, her gift to us.

I’d like to leave you with Dorothy’s own words, written in 1971: