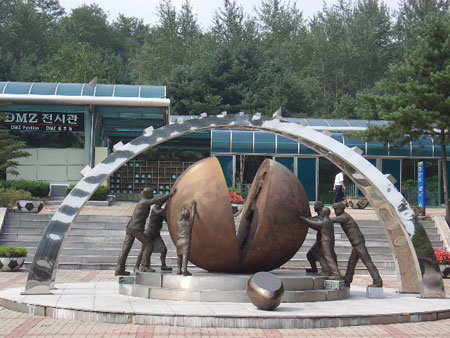 The Demilitarized Zone is a strip of land running across the Korean Peninsula; it was established as part of the armistice agreement in 1953 to serve as a buffer zone between North and South Korea. Since 1974, the South Koreans have discovered four infiltration tunnels that start in North Korea and dip under the DMZ; they speculate that there may be as many as twenty yet-to-be-discovered tunnels. Only 20 miles from the South Korean capital of Seoul, the 3rd Infiltration Tunnel — “the Tunnel of Aggression” — was discovered in 1978. It penetrates 0.3 miles south of the DMZ, running through bedrock at a depth of about 240 feet below ground. Capable of moving a full division (30,000 soldiers, plus their weapons) per hour, to the South Koreans it was obviously designed for a surprise attack on Seoul. The North Koreans claim it was used for coal mining, although there is no coal in the area. This tunnel is now a tourist attraction, complete with a gift shop (concrete barriers prevent tourists from passing to the other side.) This statue is one of a number of pro-unification artworks and sculptures found on both sides of the DMZ. The split earth indicates the sadness of a country torn in two. Men, women and children on both sides of the divide attempt to push the earth back together, in a symbol of peace and forgiveness.