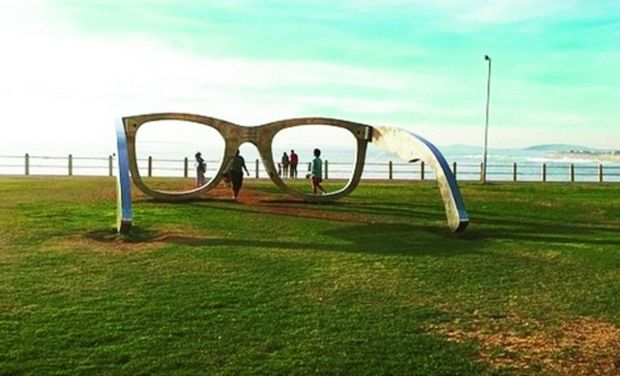 In 2014 a giant pair of Ray-Ban Wayfarers appeared on Cape Town’s  Sea Point Promenade, pointed towards Robben Island, where Nelson Mandela was incarcerated for 18 of his 27 years as a prisoner. The artist, Michael Elion, pitched it as a public art installation; the Cape Town authorities claim not to have known neither  that it was partially funded by Ray-Ban nor that it would ostensibly honor Mandela. Elion intended, he said, to allude to Mandela’s ruminations about freedom, and the viewers’ lack of perception of ‘the invisible barriers and prejudices’ that still cloud  perspective. The public reaction has generally been one of outrage, claiming that it is appropriation, commercialization and an exhibition of White privilege. One critic noted, “Really, it’s a stunning emetic trigger that suggests that Nelson Mandela is beckoning us from the afterlife to buy Ray-Ban sunglasses, to do our duty for reconciliation and nation-building by consuming this luxury product.”  Another tweeted, “Details of Nelson Mandela’s love for Ray Bans were to be revealed in his second book, The Long Walk To Free Market Capitalism.” There is a petition circulating to have it removed.