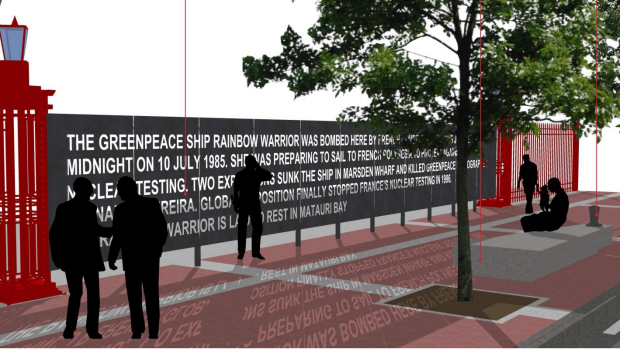 In the Summer of 2015, Ports of Auckland proposed building a monument to the bombing of the Rainbow Warrior on the city’s waterfront. The Greenpeace vessel was sunk in a terrorist attack while it was moored at Marsden Wharf in July 1985. The wharf is being demolished and the Ports Authority said it was important that the event was permanently commemorated. As shown in the artist’s rendition, above, the design includes a seat facing north incorporating the bollard the Rainbow Warrior’s bow line was moored to when she was sunk. There would be a description of events laser cut into a steel sheet on the red wharf fence next to it. The plan is supported by Greenpeace.