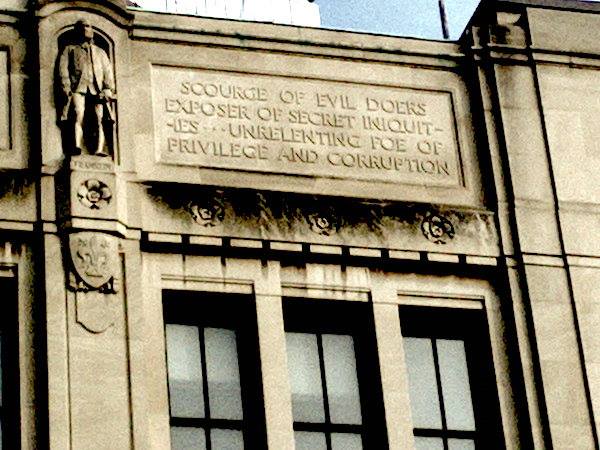 The Detroit Evening News was founded in 1873 by newspaper tycoon James E. Scripps; in 1916, architect Albert Kahn was hired to design a new home for its operations. The Lafayette Boulevard facade features four statues by Corrado Parducci and five panels spelling out the paper’s mission as a watchdog for the people. The complete text is: “Mirror of the public mind. Interpreter of the public intent – troubler of the public conscience. Reflector of every human interest – friend of every righteous cause – encourager of every generous act. Bearer of intelligence – dispeller of ignorance and prejudice – A light shining into all dark places. Promoter of civic welfare and civic pride – Bond of civic unity – Protector of civil rights. Scourge of evil doers. Exposer of secret iniquities – Unrelenting foe of privilege and corruption.” The statues are of Gutenberg, Caxton, Ben Franklin and Renaissance printer Christophe Plantin. In 2014 the Detroit Media Partnership (the Detroit News and the Detroit Free Press) moved to a smaller building and this one was sold to a real estate developer, who has carefully restored it. Now offices, its biggest tenant is Quicken Loans.