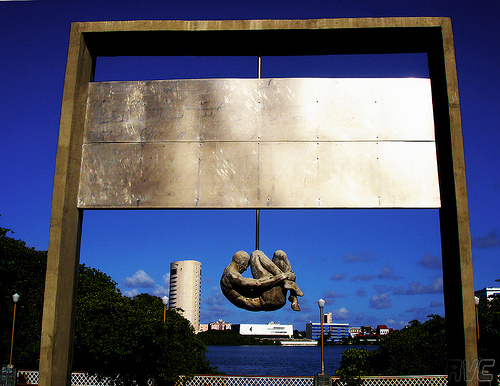 The Monument No More Torture is in Padre Henrique Plaza in Recife, Pernambuco, Brazil. Designed by the architect Demetrio Albuquerque in response to a city request for proposals, it was the first monument built in honor of the dead and disappeared during the military dictatorship (1964-1985.) The city envisaged construction of a monument to represent torture conditions and the disrespect to human dignity to which the population had been subjected. It was dedicated in 1993. The torture device is a Pau de Arara, a Portuguese term meaning “macaw’s perch,” originating from the practice of tying birds to a pole for sale. The torture technique consists of a tube, bar or pole placed over the victim’s biceps and behind the knees while tying both the victim’s both ankles and wrists together. The entire assembly is suspended between two metal platforms forming what looks like a bird’s perch. This technique is believed to originate from Portuguese slave traders.