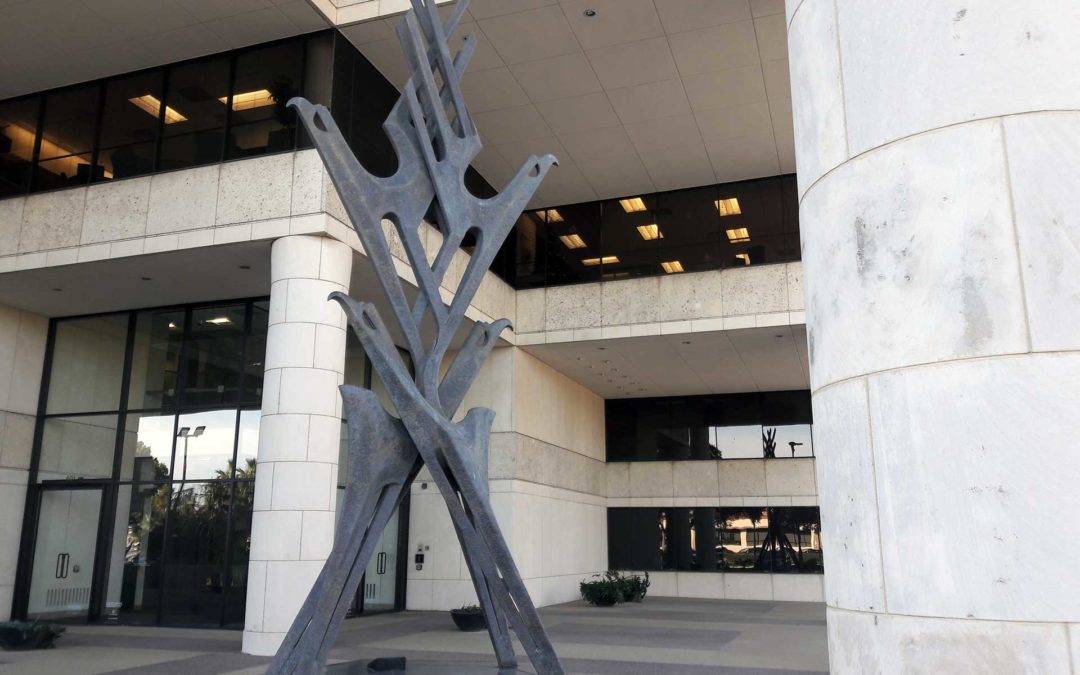 “Birds of Freedom,” installed by Mexican artist Victor Manuel Contreras in 1982, is at the entrance to the Pyramid Building (on the north side of Loop 410, across the highway from North Star Mall.) In the words of the artist:

“The eagle, symbol of the Sun, of spiritual flight, of fire and air, king of birds and bird of kings, many and varied are the legends and myths which through the ages have reflected the representational character. In Mexico, in prehistoric times, the eagle is the founder of the great Tenochtitlan [site of current Mexico City]. In its movements it indicates Romulus and Remus where Rome is to be erected.

In ancient Greek culture it is the symbol of immortality, emblem of Zeus, to become the fire of the immortals. In Hindu mythology, Garuda is the bird who transports the god Vishnu. For the church it is a symbol of the Ascension and of the spiritual. St. John is portrayed with the eagle, signifying his divine inspiration. When it appears in two-headed form, it represents duality, good and evil, creation and destruction, life giving and taking. In many countries it expresses victory, supremacy, in different historical periods it is an emblem, patriotic, mythical, minted in coin.

From the premise composed of such mythical, religious and historical values, this sculptural work is born, consisting of four eagles. The first two, rising, suggest the concept of a pyramid, a symbol of the ascending forces of the earth.

Within a constant parallelism, in rays of light directed towards the infinite emerge the other two eagles, implying the eternal duality of day and night interlacing their wings. In mysticism the number “four” signifies infinite security. In this work the four eagles symbolize freedom, as only in freedom can man find Peace!”