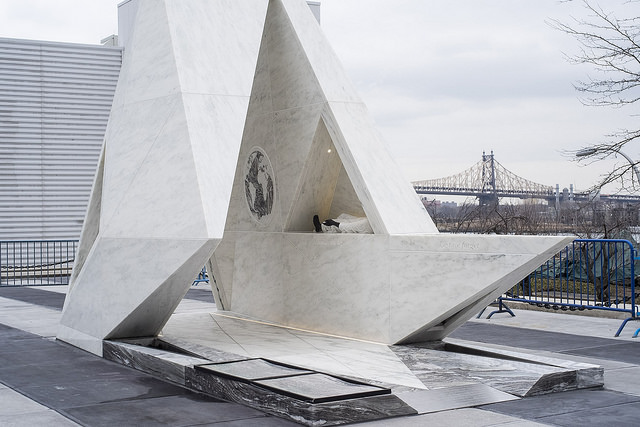 A sculpture commissioned by the United Nations to commemorate the end of slave trade was unveiled at UN Headquarters in New York on 25 March, 2015 to coincide with the International Day of remembrance for the victims of slavery. Visitors can pass through the Ark of Return to experience three primary elements. The first element, Acknowledge the Tragedy, is a three-dimensional map that depicts the global scale of the triangular slave trade. The second element, Consider the Legacy, is a full scale human figure lying in front of a wall inscribed with images of the interior of a slave ship. This element illustrates the extreme conditions under which millions of African people were transported during the Middle Passage. The third element, Lest We Forget, is a triangular reflecting pool where visitors can honor the memory of the millions of souls who were lost. According to the architect, Rodney Leon: “The name Ark of Return is a reference to the Door of no Return in Senegal, where slaves held in captivity on the African coast went through before being shipped away. The idea of people being taken through that door onto slave ships and never to return was a very tragic image and we felt it would be a good counterpoint to establish a spiritual space of return, an Ark of Return, a vessel where we can begin to create a counter-narrative and undo some of that experience. The idea is that you are not necessarily returning physically, but there is a psychological, spiritual and emotional transformation, as well as a cleansing feeling through the process of moving forward to a place where humanity comes closer together.”