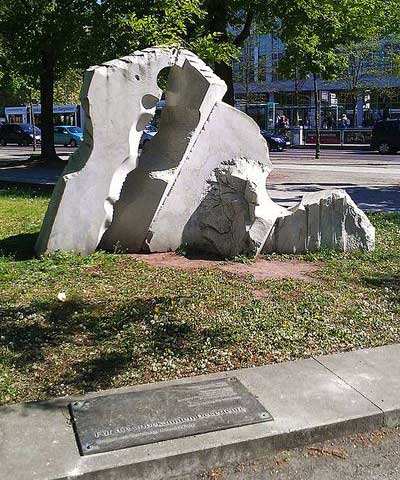 Between 1939 and 1945, about 400,000 German soldiers (2% of the total) deserted or attempted to desert, not counting those surrendering in battle. 30,000 of them were caught in the act, 23,000 of those were executed. This was the first of the monuments now in Germany erected in memory of “those who refused to kill others in unjust wars.” The first official memorial for the Unknown Deserter was meant to be placed in Bonn, capital of West Germany, but was finished just after the Wall came down and was set up in Potsdam, considered to be the center of German militarism. In 2002 a general pardon was issued for those who had deserted the Wehrmacht during World War II. It was sculpted by Mehmet Aksoy, of Turkey.