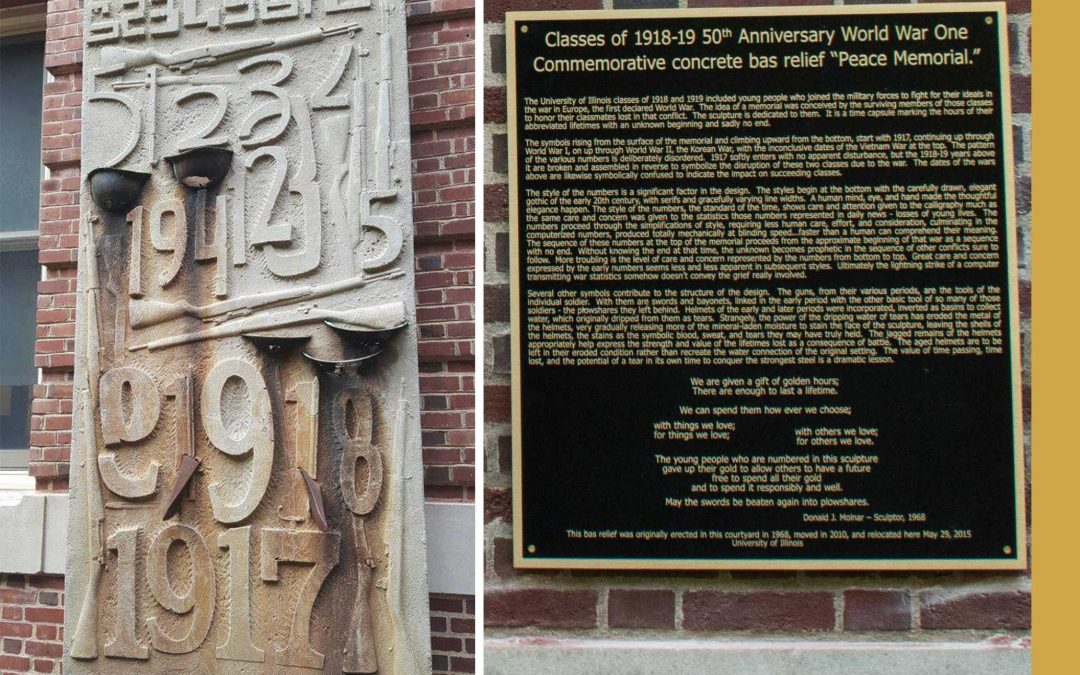 In 1968, the University of Illinois’ classes of 1918 and 1919 requested Donald J. Molnar, who was a campus landscape architect at the time, to build a memorial commemorating the 50th anniversary of the end of World War I. He envisioned a fountain and a statue in the south courtyard of Lincoln Hall, but he couldn’t find one for love or money, so he made one himself (a bas-relief, actually.) It was his first art installation, and his last, and it it quite remarkable. It was dedicated during homecoming 1969 and measures 4-by-10 feet.

The sculpture was removed in 2010 when renovations to Lincoln Hall began. The fountain was cut off from the bottom of the sculpture because it created a pool of stagnant water. The relief, minus the fountain, was reinstalled in 2015.

Molnar was interviewed by the Daily Illini when the memorial was returned and he explained its symbolism:

I did not feel like I had an obligation to soldiers or to heroes of the fallen; I was just trying to tell a story. It being during a war period just helped it make more sense as far as the fact that you can’t run away from it. It happened; it will happen again. It will happen again, but we all should be thinking about it at least.

His idea was to “present the dates that their class was involved in a war and look into the future.” The sculpture begins with 1917 at the bottom, followed by the years of World War I, World War II, the Korean War and the Vietnam War.

It’s serious business when you have to do one of these complicated (numbers) to tell in the news how many people died today, but it’s simpler when they are mechanical numbers farther up, and it’s real easy if they are just digital numbers that come out of a machine. There’s nothing personal about that, and I thought this is a good way to help people worry about this.

In marched a troop from the Armory, handed me each gun in turn and I take it and (press it) down into the sand, hand it back. They do the next one. They got all done, dusted them off and marched out again.

There are also several small plowshares sculpted into the concrete, made to reflect not only the “swords into plowshares” passage from Isaiah 2:4, but also the Midwestern farms that sent their young men to serve.