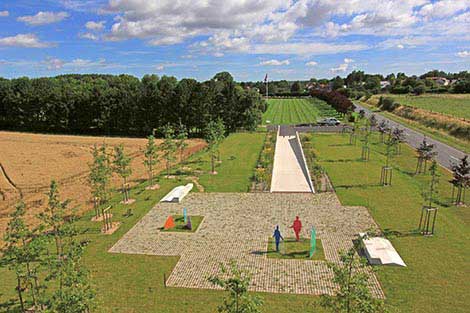 Fraternization—peaceful and sometimes friendly interactions between opposing forces—was a regular feature in quiet front-line sectors of the Western Front during World War I. Although the 1914 Christmas Truce is the most well known, throughout the war soldiers exchanged greetings and newspapers and other small acts in recognition of their common humanity.

Such acts were observed by Louis Barthas, a French Infantry corporal who spent the war in the trenches. He recorded his experiences and, after the war, copied them into a series of notebooks. His grandson found and published them in 1978, 25 years after Barthes’ death. In them he wrote:

His dream became real on December 17, 2015 when this monument was dedicated by French President François Hollande.

The monument is entered via a causeway meant to mimic a trench. At the top is a line of LED lights, symbolizing the front line, and the Barthas quotation, in French, English, Dutch and German.

The trench opens into a a tree-covered belvedere, causing the visitor to “rise up” and “elevate the debate” literally and figuratively. It is an enclosed space, a space out of time, as was the no man’s land where the soldiers fraternized. The vegetation is intended to reflect the nationalities depicted: the double alignment of trees at the front (French symmetry), the flower meadow on the slopes (English), grove of trees (German).

At the top, six human-sized silhouettes represent French, English and German soldiers, captured in the act of fraternization in the manner of a freeze frame. The translucent colored glass radiates the light emitted from within and draws the visitor into the scene, to fraternize and mingle with these men. The strength of the vivid colors symbolizes those moments of warmth shared by the soldiers around Christmas candles or the flame of a camp fire.

The Monument to the Fraternizations was designed by the artist Gérard Collin-Thiébaut and the landscape architects of the Atelier Sensomoto, Sylvain Delboy and Sarah Kassler.

A Christmas Truce monument was dedicated in Staffordshire, England, in December 2014.

The story of the Christmas Truce has resonated in popular culture. I first heard about it from this 1984 song, Christmas in the Trenches, by John McCutcheon:

It was the subject of the 2005 French Film, Joyeux Noël. Those involved with the film were instrumental in the creation of the monument.

It was also part of Richard Attenborough’s 1969 film, Oh! what a Lovely War:

And the British Sainsbury’s grocery chain, in cooperation with the British Legion, made a Christmas ad about it:

If you want to locate Neuville-Saint-Vaast, it is 2.2km (about a mile) southwest of Vimy on this map, in the area shown in the inset: