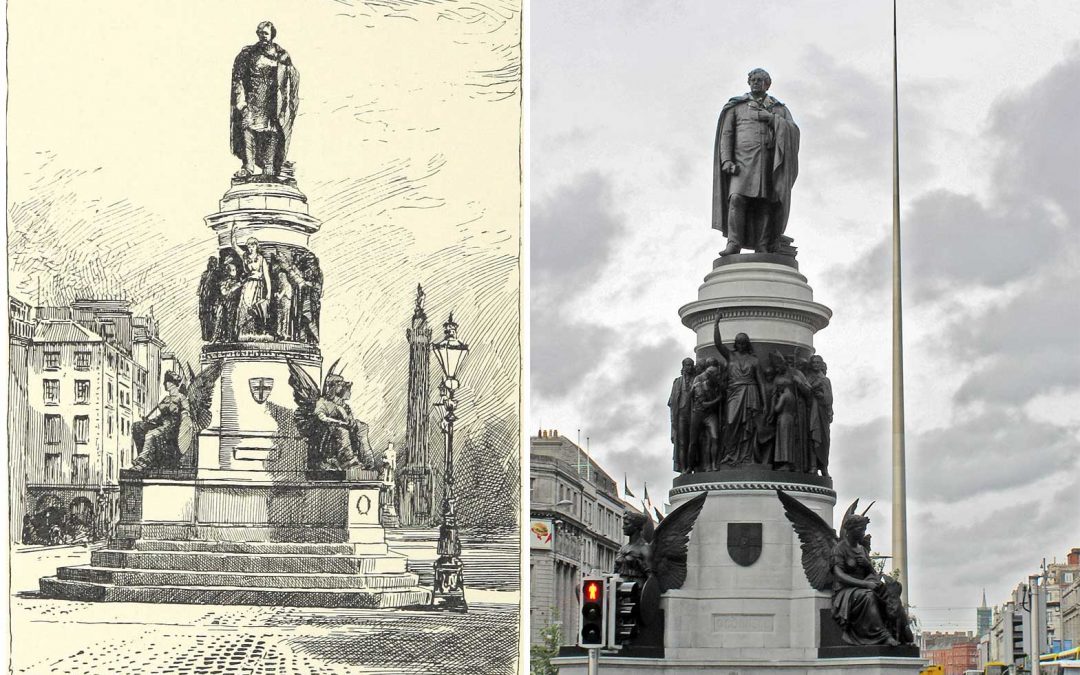 Unveiled on August 15, in 1882, the monument of the “Liberator” was designed and sculpted by John Henry Foley (who also designed the Albert Memorial in London.)

Situated on the south side of O’Connell Street, the monument consists of three bronze sections separated by a granite plinth. At the top is the man himself, Daniel O’Connell, standing atop a on a tall drum-like pedestal, encircled below by a bronze frieze of nearly thirty figures symbolizing church, professions, arts, trades and the peasants. A central figure of Erin trampling upon chains, points upwards and holds 1829 Act of Catholic Emancipation in her left hand.

At the base of the monument are four-winged victories, each representing a virtue attributed to O’Connell: courage (with a snake and fasces), fidelity (with a dog), patriotism (with sword and shield ), and eloquence (with a book.) Two of the Victories have bullet holes, reminders of the 1916 Easter Uprising. Also depicted are four shields representing Ireland’s four provinces: Ulster, Leinster, Munster and Connacht.

On the day of the laying of the foundation stone in 1864, the Lord Mayor of Dublin Peter Paul MacSwiney told the crowd of thousands that:

The people of Ireland meet today to honour the man whose matchless genius won Emancipation, and whose fearless hand struck off the fetters whereby six millions of his country men were held in bondage in their own land….

In the 1882 French woodcut on the left you can see a statue of Lord Nelson, called Nelson’s Pillar, over O’Connell’s left shoulder. It survived until March 1966, when it was severely damaged by explosives planted by Irish Republican Army (IRA.) Its remnants were later destroyed by the Irish Army. In 2003 the Spire of Dublin, visible in the right-hand photo, was erected on that spot.

Daniel O’Connell (6 August 1775 – 15 May 1847) was an Irish political leader who campaigned for Catholic emancipation—including the right for Catholics to sit in the Westminster Parliament —and repeal of the Acts of Union which combined Great Britain and Ireland. O’Connell’s philosophy of nonviolence and organizing methods inspired leaders all over the world, including Mahatma Gandhi and Martin Luther King.