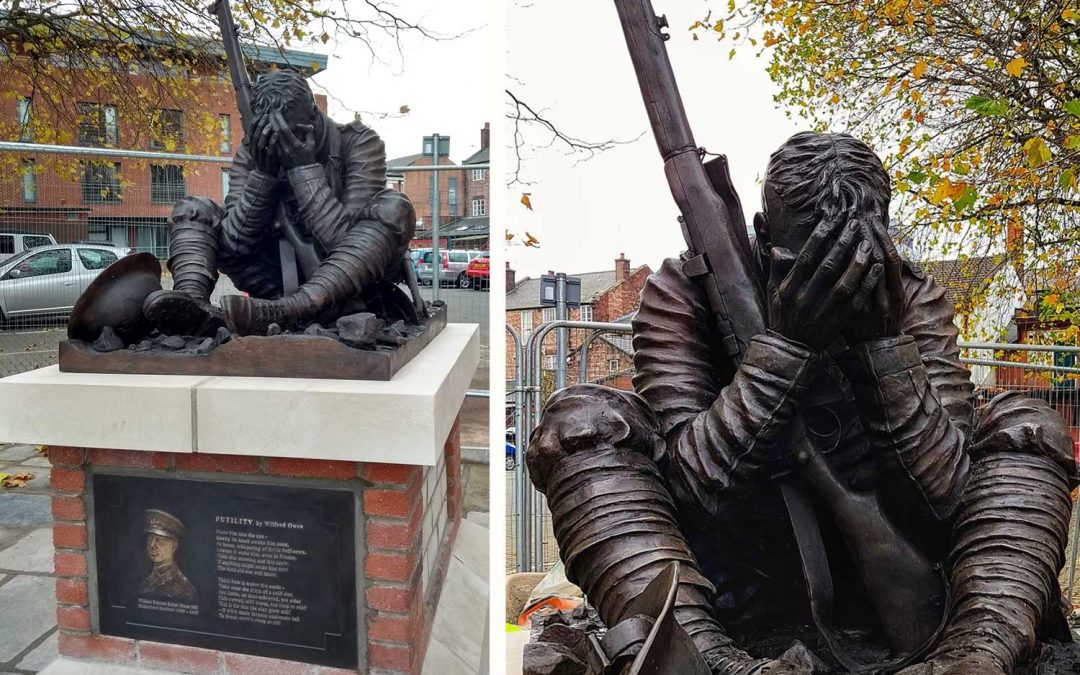 A statue commemorating the life of war poet Wilfred Owen was unveiled marking the 100th anniversary of Owen’s death. He was raised in this town, across the Mersey River from Liverpool, before dying in action aged 25, just one week before the end of the First World War in November, 1918.

Named after one of Owen’s poems, ‘Futility’ is by sculptor Jim Whelan, based on a sketch by David S.W. Jones, an art master at the Birkenhead school in the 1960s. The statue represents an exhausted World War One solider, on a low pedestal so it can be touched, as noted by Birkenhead MP Frank Field, who unveiled the statue. Owen, who suffered from PTSD (then called shell shock), was evacuated to Scotland for treatment, and volunteered to return to the Front.

Owen’s posthumously published poem, one of his least bitter, is inscribed on an plaque at the base:

Move him into the sun—
Gently its touch awoke him once,
At home, whispering of fields half-sown.
Always it woke him, even in France,
Until this morning and this snow.
If anything might rouse him now
The kind old sun will know.

Think how it wakes the seeds,—
Woke, once, the clays of a cold star.
Are limbs, so dear-achieved, are sides,
Full-nerved—still warm—too hard to stir?
Was it for this the clay grew tall?
—O what made fatuous sunbeams toil
To break earth’s sleep at all?

Other well-known works by Owen include ‘Dulce et Decorum Est’ and ‘Anthem for Doomed Youth’.