Monday’s Monument: Memorial to the Murdered Members of the Reichstag, Berlin, Germany 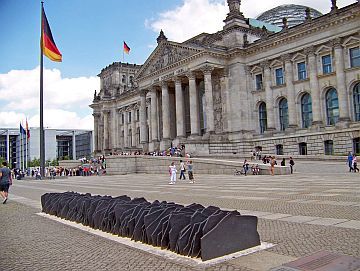 This memorial is located in front of the Reichstag building and commemorates the 96 members of the Germany’s  last democratically elected pre-war parliament who were murdered by the Nazis between 1933 and 1945, in concentration camps.

On February 27, 1933, four weeks after Adolf Hitler was sworn in as Chancellor of Germany, a fire destroyed the Reichstag, the seat of the German parliament. Hitler’s ruling Nazi party used the fire as evidence that the Communists were beginning a plot against the German government. The day after the fire, President Hindenburg pushed through the Reichstag Fire Decree, suspending all civil liberties in Germany. In the following weeks, thousands of members of democratic parties were arrested, among them many former members of the parliament.

The idea of creating the monument started in the 1980s, and the memorial was erected in September 1992. It was designed by Dieter Appelt, Klaus W. Eisenlohr, Justus Müller, and Christian Zwirner. The memorial is made of 96 cast iron plates, with the names, birth and death dates and places engraved on the edges. It has been designed so that it can be extended if new names are discovered in the future.