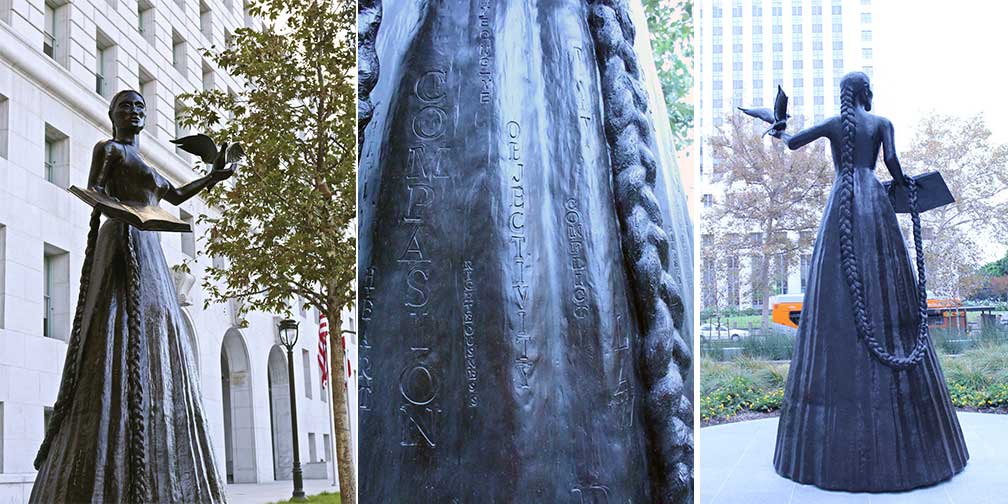 Unveiled in October, 2014, this statue, created by Los Angeles artist Alison Saar, is intended to exemplify the spirit and values of justice represented in the roles of District Attorney’s Office and the Sheriff’s Department, the tenants of the recently renovated Hall of Justice where she stands.

“Embodied” stands 12 feet tall and depicts a woman holding a book of law in her right hand and a dove taking flight from her raised left hand.  Saar has said the contrast shows the woman weighing and balancing the book of law and equating it to freedom and peace.

Imprinted on her dress are more than 200 words of “Justice” in more than a dozen languages collected from conversations Saar had with staff members of LADA, the Sheriff’s Department and others. Chinese, Japanese, Korean, Spanish, Tagalog and Vietnamese are among the languages represented. The figure’s facial features are a composite of many ethnicities, according to Saar, representing the diverse populations of Los Angeles County. Draped over one arm, she holds along braid meant to symbolize the coming together of the many facets of the Los Angeles County District Attorney’s Office and the Los Angeles County Sheriff’s Department to ensure a secure and peaceful environment.