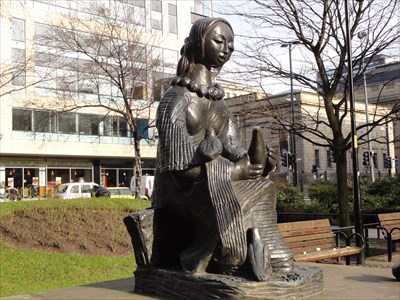 The Messenger of Peace sculpture was the winner of a 1986 competition to celebrate the status of Manchester as the world’s first nuclear free city. This bronze statue, created by sculptor Barbara Pearson, was the winning entry and it showed a woman with doves around her.

An inscription on the sculpture reads: “Messengers of peace the world’s first nuclear free city sponsored by the planning committee of Manchester city council’.

This statue and the peace garden in St. Peter’s Square where it stood were reportedly removed in 2014 when the Metrolink tram system was expanded. Plans are supposedly underway to create a new peace garden in nearby Lincoln Square.