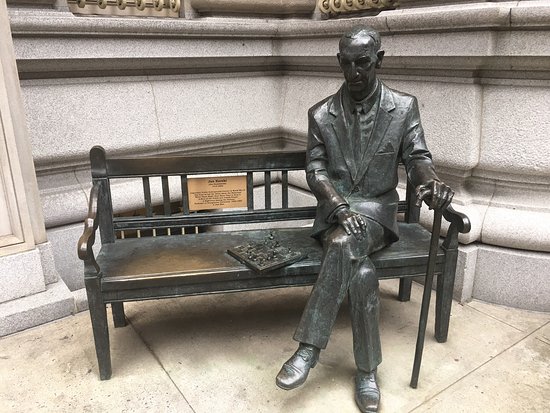 Jan Karski was a World War II Polish resistance fighter who risked his life to bring firsthand reports of the Holocaust to the Allies. This statue of him is on the southeast corner of Madison Avenue & 37th St., in front of the Polish Consulate. This bronze statue by Polish sculptor  Karol Badyna was unveiled in 2007. Identical statues are at Georgetown University (where he taught for 40 years); in Tel Aviv and in his hometown of Lodz. The object to his right is a chess board.

Karski, was born Jan Kozielewski in Lodz, Poland in 1914. After graduating with honors from law and diplomacy studies at the University of Lwow, he earned a diplomatic appointment. He was called up for military duty when Germany invaded Poland on September 1, 1939 and escaped when his unit was captured by the Soviets. He joined the Polish underground and worked as a courier bringing information to and from the Polish government in exile.

Having witnessed Nazi atrocities against the Jews, he provided eyewitness accounts to British foreign secretary Anthony Eden, President Roosevelt, and US Supreme Court Justice Felix Frankfurter. They all ignored him.

Karski was recognized by Yad Vashem as Righteous Among the Nations and awarded a posthumous Presidential Medal of Freedom by President Barack Obama.