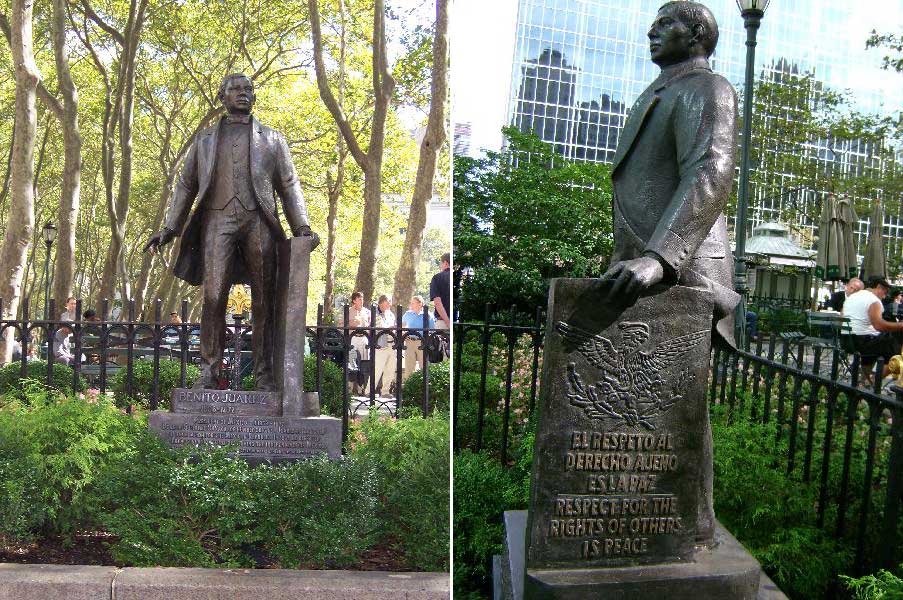 This monument depicts Benito Juárez (1806–1872), one of Mexico’s most loved political figures and the first Mexican figure to be commemorated with a New York City monument. Mexican sculptor Moises Cabrera Orozco created the piece, which portrays Juárez leaning on a tablet with his quotation, “Respect for the rights of others is peace,” inscribed in both Spanish and English. The monument, dedicated on October 9, 2004, was sponsored by the Mexican state of Oaxaca on behalf of the Mexican Government with additional support from the Mexican Trade Center.

Born in Guelatao, Oaxaca in 1806, Juárez entered the seminary and eventually studied law. Once governor of Oaxaca and a major reform figure, he was later exiled, spending time in New Orleans before returning to Mexico during the Mexican Civil War (1858–1861). After the victory of the reformers, Juárez became Mexico’s first indigenous president, serving from 1861 to 1863. He served again from 1867 to 1872. As a force in Mexico’s shift to a democratic society, he is revered as one of Mexico’s greatest political leaders.