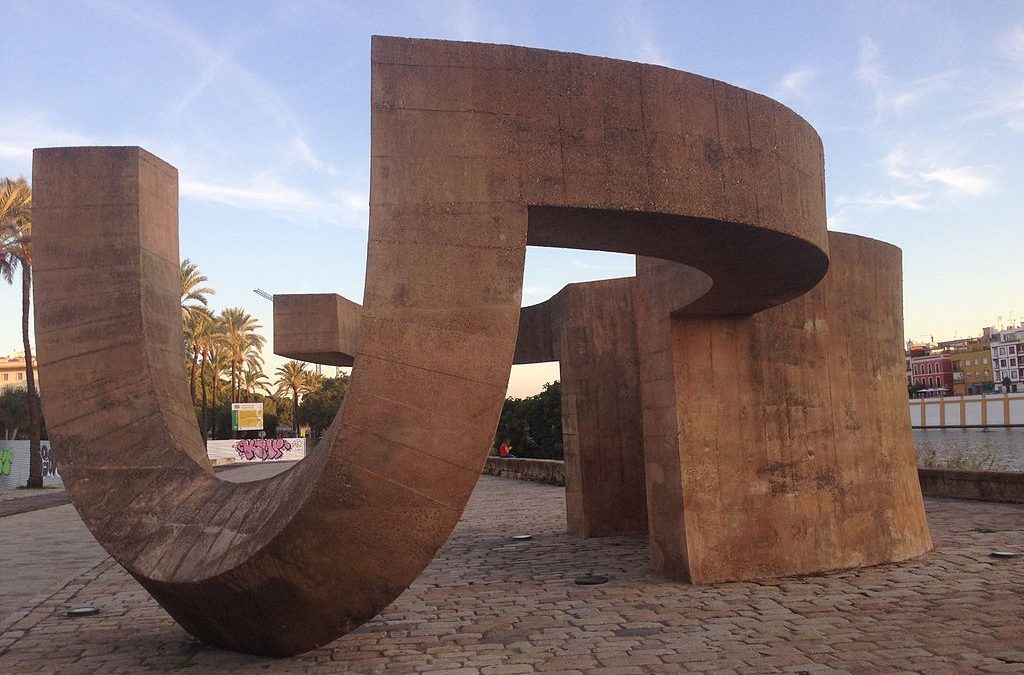 Basque sculptor Eduardo Chillida’s Monument to Tolerance, is next to the Triana Bridge by the Guadalquivir River. It was completed in 1992 to coincide with the Universal Exposition of Seville, it was commissioned by The Friends of Sefarad Foundation for the Sephardic Jews. It commemorates the Edict of Granada in 1492, in which the Spanish Catholic kings expelled the Jews from their kingdoms. President Chaim Herzog of Israel dedicated it.

It can be interpreted as a stylized menorah, broken by the antisemitism of the Inquisition, or as someone offering an understanding embrace or a lonely figure seeking the solace and comfort of a hug. Or maybe both.

Upon its unveiling, Chillida said: “It is not my intention to give any example to anyone, but it would be perfect if one day in Seville the Jewish people, the Arab and the Christian would again shake hands. That is precisely the idea that reflects the monument.” It was was inaugurated by President Chaim Herzog of Israel to mark the 500th anniversary of the expulsion of the Jews from Spain in 1492.

Accompanying the installation are these words by Holocaust survivor and Nobel Peace Prize Laureate Elie Wiesel:

Stop Men and women who pass. Stop and listen.

Listen to the voice of Seville, wounded and melodious voice. The memory, which is also yours, is Jewish and Christian, Muslim and secular, young and old. Humanity enters its startles of light and shadows, it is collected in that voice to extract from the past foundations of hope.

Here as in other places, he loved and hated himself for dark reasons and for no reason; they prayed for the sun and the rain; the life was interpreted giving death, it was believed to be strong for persecuting the weak, it affirmed the honor of God, but also the dishonor of men.

Here as in other places, tolerance prevails, and you know it well, men and women who listen to this voice of Seville. You know well that, faced with the fate that is common to you, nothing separates you. Since God is God, you are all his children. In his eyes, all beings are worth the same. The truth they invoke is not valid if it does not make them all sovereigns.

Certainly all life ends in the night, but to enlighten it is your mission.