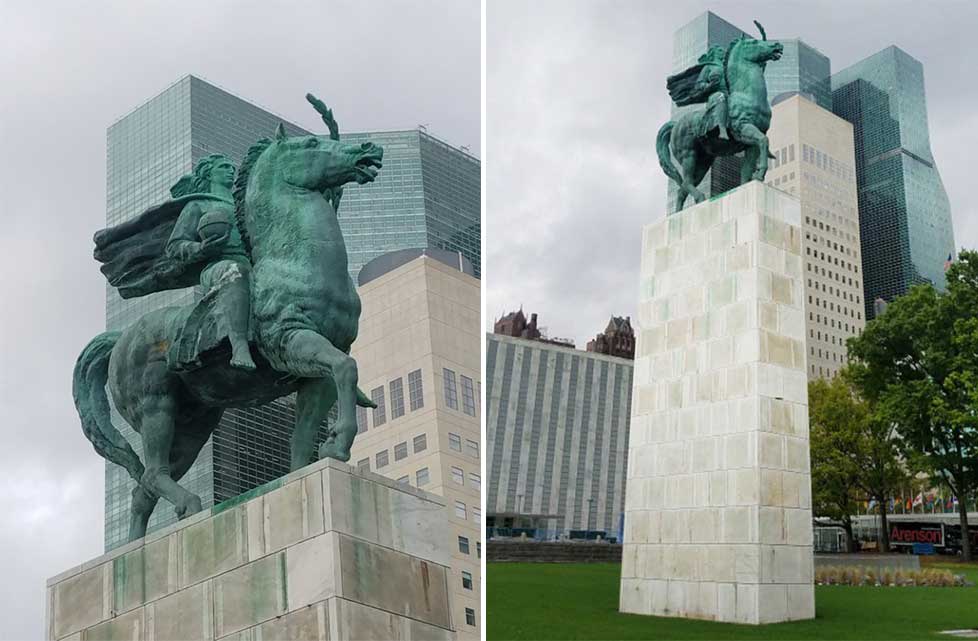 After World War II, the General Assembly of the United Nations decided that its headquarters would be established in New York City. In 1946 the Rockefeller family donated funds for the acquisition of a tract of land in Manhattan. Construction of the building complex began in 1949 and each member state was assigned a task of refining the space. The Scandinavian countries, for example, organized and decorated the interior of the Security Council. India and other Asian countries donated large handmade carpets for the halls. The then-government of Yugoslavia decided to make a gift to the UN that would emphasize its commitment to world peace.

Croatian sculptor Antun Augustinčić was given the task and proposed an equestrian statue which he named Vjesnica mira, Herald of Peace. He opted for a female figure on horseback and later explained his choice to the journalists by saying that “peace would be far better protected if the decision rested with women instead of men.” When challenged that horse was a war animal, he replied that “… we must fight for peace.”

The statue is a triumphant female figure looking resolutely straight ahead, holding a globe in her right hand and an olive branch in her raised left hand. The cape fluttering behind her and the horse in motion suggest a determined direction forward, that is, a symbolic leadership of the world nations toward peace.

The Peace monument is 5.5 meters tall and weighs 7.5 tonnes. In was installed in 1954. Later in the 1950s the original red stone cladding on the concrete base was replaced by white stone from the island of Brač. In 1979 the statue was temporarily removed due to construction of an underground public parking garage. Extensive restoration of the Peace monument was conducted in 2016.