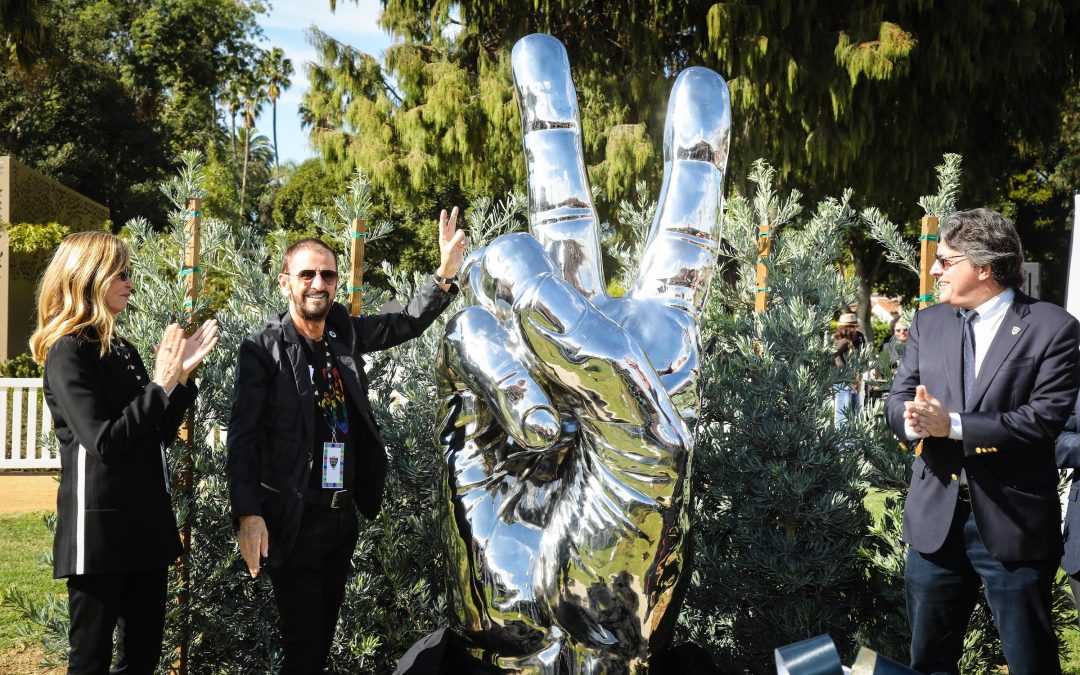 When Ringo Starr decided to live full time in Beverly Hills, he planned to honor his new hometown with a 1,500-pound polished steel monument of his hand making a peace sign. In 2017 the city’s art commission declined.

In 2019 there was a new mayor and a new arts council, and the statue was approved for installation in Beverly Gardens Park, near city hall, where it was unveiled on November 2, 2019.

Ringo wanted to be sure fans could snap pictures with the monument — but only from the palm side, not the back of the hand, which is considered a rude gesture in the United Kingdom. The agreed-upon location is obscured by tall plants.

Mayor John A. Mirisch suggested the sculpture reflects the values of Beverly Hills: “We want to be a city of love and peace.”

The original 2017 application explained the meaning of the statue:

In 1969 Ringo adopted the hand gesture of Peace and Love to show the world there is a better way. This has been the nonreligious, nonsectarian guide for ensuing generations of people worldwide and propelled the world into the possibility of peaceful loving co-existence.

In collaboration with British artist Guy Portelli, Ringo had a mold made of his own hand, and from that mold made the statue, cast first in bronze, and later in aluminum. When he moved to California in 2016, he had the original masters copies of the hand shipped to LA for safekeeping. He asked local architect and sculptor Jeremy Morrelli to review the masters and assess how the art could be reproduced. Morrelli cast the first two pieces from these molds in Stainless Steel, high polished to a mirror finish.