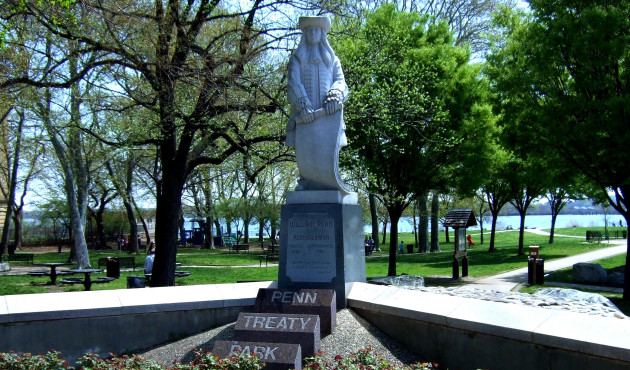 In 1683, the land that is now the park was part of the Lenape village of Shackamaxon. Under an elm tree, William Penn famously entered into a treaty of peace with a chief of the Lenape Turtle Clan named Tamanend (later referred to by the Dutch as Tammany or Saint Tammany.)

Penn, unarmed in accord with Quaker custom and allegedly speaking the Algonquian language, proclaimed that:

“We meet on the broad pathway of good faith and good-will; no advantage shall be taken on either side, but all shall be openness and love. We are the same as if one man’s body was to be divided into two parts; we are of one flesh and one blood.”

Tamanend replied, according to legend:

“We will live in love with William Penn and his children as long as the creeks and rivers run, and while the sun, moon, and stars endure.”

This peace between the Lenape Turtle Clan and Penn’s successors would endure almost a century, until the Penn’s Creek Massacre of 1755. It was remarked upon by Voltaire, who called it “… the only treaty never sworn to and never broken.”

The famous elm tree under which the treaty was conducted fell during a storm in 1810. Soon thereafter, a monument was erected on the site where the elm tree was located to commemorate the treaty. The small obelisk remained tucked away in the northwest corner of a lumber yard that sat on the site, until actions were taken in 1893 to acquire the land and build the park that exists today. The park officially opened on October 28, 1893.

The statue of William Penn was erected and dedicated on April 24, 1982 by the National Society Daughters of The American Colonists in commemoration of the 300th anniversary of the founding of Pennsylvania and the treaty with the Indians.

The story told here is, of course, one-sided. William Penn gets mentioned by name and Tamanend and his Turtle Clan of the Lenapes doesn’t: they are just “Indians,” represented not by statues and obelisks and plaque but by an abstract turtle climbing structure in the newly-renovated playground.

For about a decade (1988-1995) a steel installation, Native Land Commemorative, by native artist Bob Hazous, stood in a traffic island just outside the park (the Fishtown area where the park lays was once heavily industrialized, then a wasteland, and is now being aggressively redeveloped.) In 2017 the Philadelphia Monument Lab installed Duane Linklater’s In Perpetuity, a temporary neon “historical reference point for the broad erasure of the presence of Indigenous peoples from lands that now include the city of Philadelphia. . . which served as a meeting place for thousands of years prior to colonial encounter.”

In 1995 the City of Philadelphia placed a 20-foot-high heroic statue of  Chief Tamanend by sculptor Raymond Sandoval at the onramp to I-95 at Front and Market Streets, about 1.5 miles south of Penn Treaty Park. He stands atop a turtle, an eagle on his shoulder, acing westward, looking into the eyes of the iconic statue of William Penn that stands atop Philadelphia’s City Hall. It’s placement almost guarantees that it will remain unnoticed.

The monuments, memorial, markers (and playground equipment) all tell a simple, happy story when the reality is complex, and often dark. Within two generations, the Lenape people of the Delaware Valley had lost most of the land they had lived on for millennia, negotiated away by Penn’s grandsons in the Walking Purchase, a deal made with the Iroquois in 1737. The New Jersey Lenape (you can see their land across the river from Penn Treaty Park) were the first in America to be isolated on a reservation, in 1758. There are forms of violence that do not involve actual bloodshed.