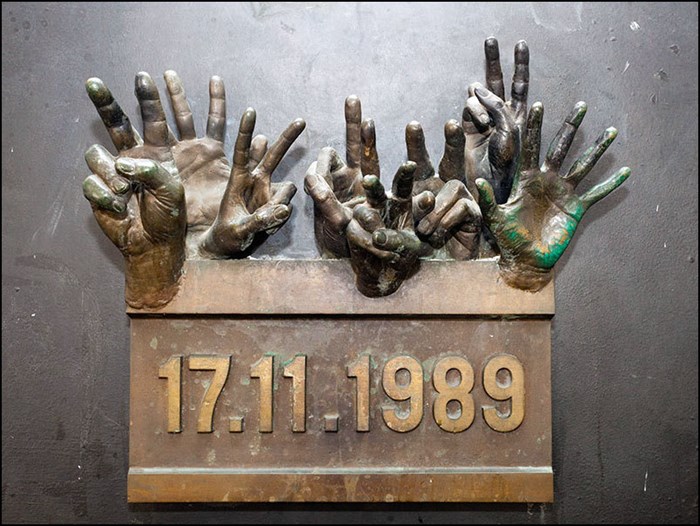 This small bronze plaque, the Velvet Revolution Monument, marks the spot where hundreds of nonviolently protesting college students were brutally beaten by riot police on the night of November 17, 1989, the 50th anniversary of when the Nazis stormed Prague in 1939 and just days after the fall of the Berlin Wall.

On this first day of the revolution, a peaceful student demonstration ended with violence on Narodni Street when riot police blocked off escape routes and severely beat students. Almost every day afterwards until the end of December brought more protests with more and more people participating. By November 20 an estimated half-million of peaceful protesters took to the streets. A general two-hour strike that involved all citizens of then-Czechoslovakia was held on November 27th. After that, demonstrations were being held almost daily in Prague’s Wenceslas Square.

On December 29, with the election of Vaclav Havel as the first president of a free Czechoslovakia since 1948, the students ended their strike and the Velvet Revolution ended in victory.

The bronze plaque is a relief of nine hands showing a gesture of victory. Sculptors Otakar Příhoda and Miroslav Krátký, placed the plaque in the arcade outside Kaňka Palace in February 1990. The building is owned by the Czech Bar Association, and they were concerned about fires caused by pilgrims lighting candles by the monument and congestion in the narrow passageway. In November 2016 it was moved from the passage to the facade of the house.