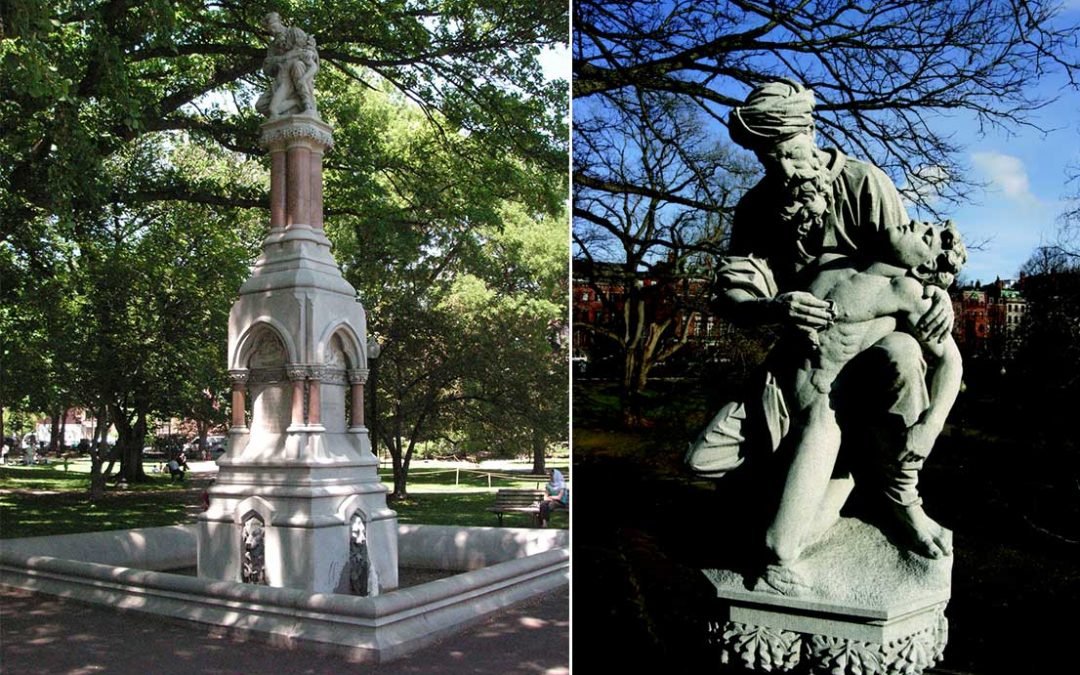 Dedicated in 1868, this forty-foot-tall monument commemorates the use of ether as an anesthetic, a pivotal moment in medical history. The first public demonstration of ether anesthesia was conducted at nearby Massachusetts General Hospital in 1846 by Boston dentist William Thomas Green Morton and Doctor John Collins Warren.

At the top are two figures sculpted by John Quincy Adams Ward: the Good Samaritan caring for an injured stranger he met on the road, a Biblical story about the relief of suffering.

Each of the four sides of the monument has an inscription pertinent to the discovery of anesthesia, and above each inscription is a bas-relief depicting four aspects of ether anesthesia: A Civil War depiction of the injured and surgery on an anesthetized soldier; surgery on an anesthetized patient in a public hospital; a woman personifying the divinely ordained triumph of science in medicine alongside another woman with a child in her lap, possibly depicting the relief of pain in childbirth; and an angel of mercy benevolently hovering above a man in pain.

To commemorate that the inhaling of ether causes insensibility to pain. First proved to the world at the Mass. General Hospital in Boston, October A.D. MDCCCXLVI.

This also cometh forth from the Lord of Hosts which is wonderful and excellent in working. (Isaiah 28-29)

In gratitude for the relief of human suffering by the inhaling of ether a citizen of Boston has erected this monument A.D. MDCCCLXVII.

Neither shall there be any more pain. (Revelation 21:4)

A pool of water at the base of the monument “serves in reminding the spectator of the Pool of Bethesda where the sick waited to be cured of their diseases.”

This statue had several points of controversy. There was bitter disagreement about who actually was the first to actually use ether: a Dr. Long, from Atlanta, claimed he first used it 19 1842. The dispute as so widespread that Mark Twain wrote about it (he was an Atlanta believer.) Although the Boston hospital was noted on the monument, the doctors themselves were neither named nor depicted.

The second point of contention was over the use of anesthetics themselves. A theological argument was made that it was against god’s will to alleviate pain and suffering, particularly in pregnancy. They cited Genesis 3:16: “To the woman he said, ‘I will make your pains in childbearing very severe; with painful labor you will give birth to children. Your desire will be for your husband, and he will rule over you.'” One of the first women to give birth under anesthesia (chloroform was eventually determined to be more effective) named her daughter “Anesthesia.” It went mainstream after Queen Victoria got knocked out for the birth of her youngest son, Leopold, in 1853.