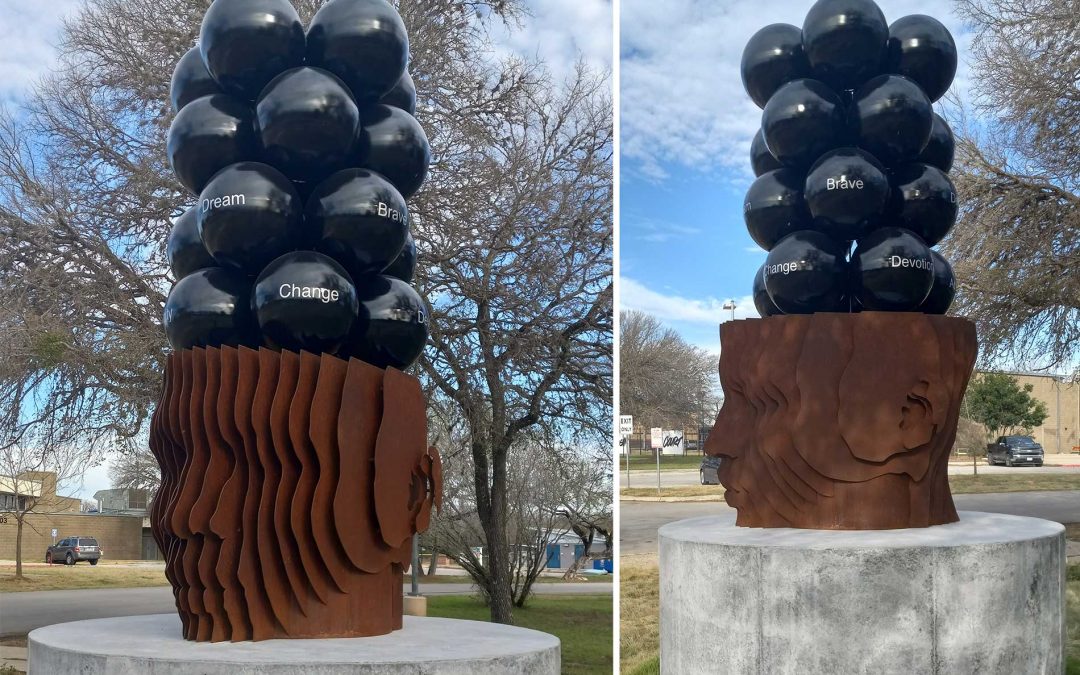 Let me make it clear. MLK Park, which is adjacent to the Eastside Boys and Girls Club on MLK Blvd., is not the same place as MLK Plaza, on N. New Braunfels, just outside the gates of Ft. Sam Houston. Do not ask me how I know this.

The 17-foot high Spheres of Reflection by artist Kaldric Dow is at the entrance to the park, the starting point for San Antonio’s MLK March. Normally, with more than 100,000 marchers, it is the largest in the nation but, for the 2nd year in a row, it is being held virtually because of pandemic safety concerns. Installation was complete on December 23 and the intent was to dedicate it on January 11, but that, too, has been deferred because of COVID.

Dow told the San Antonio Report, “I want [people] to feel familiar with the face to where it can represent someone in their family or themselves.” The is cut from industrial Cor-Ten steel, its rusty patina touching on Black skin tones. Rings of black-painted steel spheres evoke hair as a symbol of pride and a celebration of heritage. A series of words on the lower rows of spheres, each taken from King’s speeches: dream, bold, desire, brave, unity, gratitude, accountability, devotion and change.

Dow, a native of Houston, attended the University of Texas at San Antonio and has made his home here. Primerily known as a portrait painter, this is his first piece of public art. It was funded by the city’s Department of Arts and Culture new “Sketch to Sculpture” program. Dow also created a smaller sculpture under the same name at the River Walk Public Art Garden located on Market Street between Alamo and Bowie Streets.

District 2 Councilperson Jalen McKee-Rodrigue told Art Daily, “It is a catalyst to start a dialogue on proper representation of Black, Indigenous and people of color and social justice. It is a perfect fit for San Antonio’s east side as we are a diverse, creative and resilient neighborhood.”