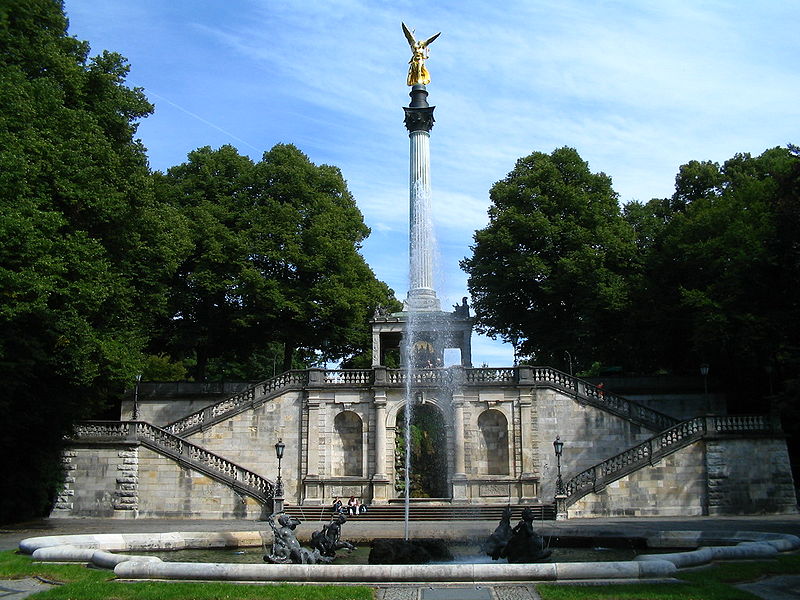 The Angel of Peace is in the Munich suburb of Bogenhausen, on the banks of the Isar. It can be seen throughout the city. The foundation stone was laid on 10 May 1896; the unveiling was on 16 July 1899. It is a reminder of the twenty five peaceful years after the Franco-German war of 1870-1871.

The focal point of the monument is the 82-foot-tall Corinthian column topped by a gilded bronze statue of the Angel of Peace. The figure is modeled after the statue of Nike – Goddess of Victory – that once crowned a column in front of the Temple of Zeus at Ancient Olympia, the Nike of Paeonius. The statue was discovered by German archaeologists in 1875 and served as an example for several other statues such as on the on the Siegessäule (victory column) in Berlin. The six-meter-high golden angel holds an olive branch in her right hand as a symbol of peace. In her left hand, she holds a figure of the goddess Athena (a “Palladion,” after the statue of Pallas Athena taken by Odysseus from Troy, that serves as a protector of a city.) It represents warfare and wisdom. According to the thinking of the time, war and victory were seen as prerequisites for peace and prosperity.

The temple beneath features four gold mosaics that depict war, victory, peace and cultural blessings. The temple shows the portraits of the German Emperors, Bavarian rulers, the Imperial Chancellor Otto von Bismarck and the German and Bavarian (but not the French) generals.