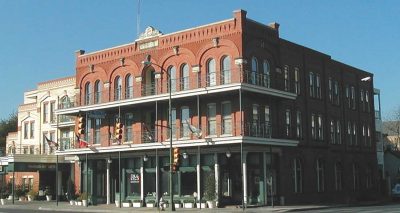 A while ago we were hanging around downtown and an out-of-town friend pointed to the Fairmont Hotel, on the edge of La Villita, and said, “bet that’s been there for a while.” Not really . . . the small hotel was built in 1906, but it’s only been THERE, at the corner of Alamo and Nueva, since 1985.

When the RiverCenter Mall was being developed, the dilapidated Fairmont Hotel, at the corner of Bowie and Commerce, stood in the way. The San Antonio Conservation Society stepped in to preserve it, and the 1,600 ton building was removed from its foundation, wrapped in steel cables, and placed atop 36 dollies, each with eight tires. The Market Street Bridge over the River Walk had to be fortified before the hotel made its half mile journey across town. It took six days. The derelict old building opened a year later as a luxury hotel, including a framed certificate on the wall from the Guinness Book of World Records for being the largest building ever moved on wheels. The records still stands.

The 21-storey high Hilton Palacio del Rio opened just in time for he 1968 Worlds Fair, HemisFair. In order to meet HemisFair’s opening date, H. B. Zachary Co. utilized traditional construction to build the first four floors and the elevator and utility core, also of reinforced concrete, were slip formed to a full height of 230 feet. Here’s the magic: all 496 guest rooms were constructed as modular units in a location 8 miles south of the construction site. The “mods” were built complete with plumbing fixtures, lighting, art work, furnishings and even ash trays. All rooms were placed in 46 days and the hotel opened 5 days early, on April 1, 1968. H.B. Zachary and his wife were the first occupants: they rode up IN their completely furnished room, carried by a crane. It’s on 200 S Alamo. You can miss it from the heart of the Riverwalk.