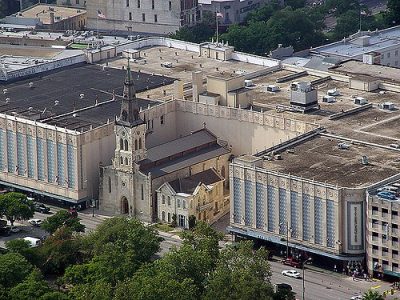 Joske’s, a home-grown department store chain, started business in Main Plaza in 1867 and operated there until 1873. Julius Joske sold the store when he returned to Berlin, but came back to San Antonio with his family and opened a new Joske’s on Alamo Plaza. In 1887 he moved across the street, to the corner of Alamo and Commerce Streets and stayed there. He piled on some additional floors (and elevators!) in 1909, and in 1936 the store got air conditioning. It expanded again a few years later, getting its current Art Deco facade and the first escalators in Texas. It was known as “the biggest store in the biggest state.”

By now, the Joskes no longer owned the stores, which went through a series of ownerships until 1987 when Dillard’s Department Stores of Little Rock, Arkansas, bought the Joske operation and rebranded all the stores as Dillard’s. The new store only occupied a portion of the gigantic space; the rest was leased to others, including RiverCenter Mall, which was under construction at this time.

But let’s go back to 1949, and St. Joske’s. The department store once again needed to expand. Joskes bought the St. Joseph’s School and set their eyes on the church itself. St. Joseph’s was the fourth Catholic parish established in San Antonio, in 1868, founded by the German community and acting as a cultural center as well as a church. The church was in decline — many of the German families had moved to the suburbs — and Joske’s was sure the congregation would leap at the offer of $200,000 for their church. The parish council unanimously voted the proposal down, so Joske’s built the addition to the department store AROUND the church. Hence, the nickname St. Joske’s. 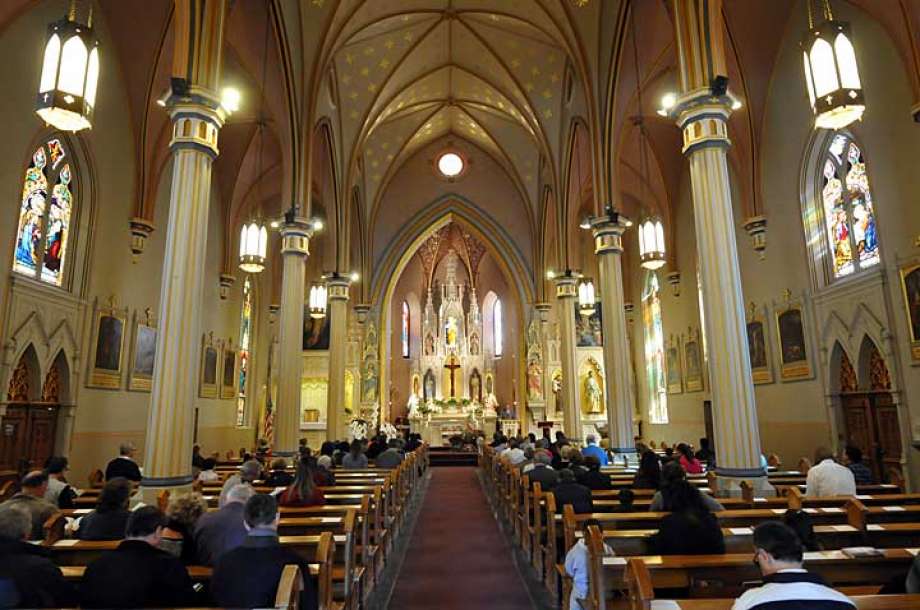 It’s a beautiful church, kept open during the day so that downtown workers and tourists can stop in for a quiet moment. On Sunday’s they have a Spanish-language Mariachi Mass at 9:30. And you are in luck: on the fourth Sunday of every month the Leiderkranz, formed as the St. Joseph’s Parish Men’s Choir in 1892,  celebrates the 11:00 Mass.  Here they are at their annual Christmas concert in McAllister Auditorium: