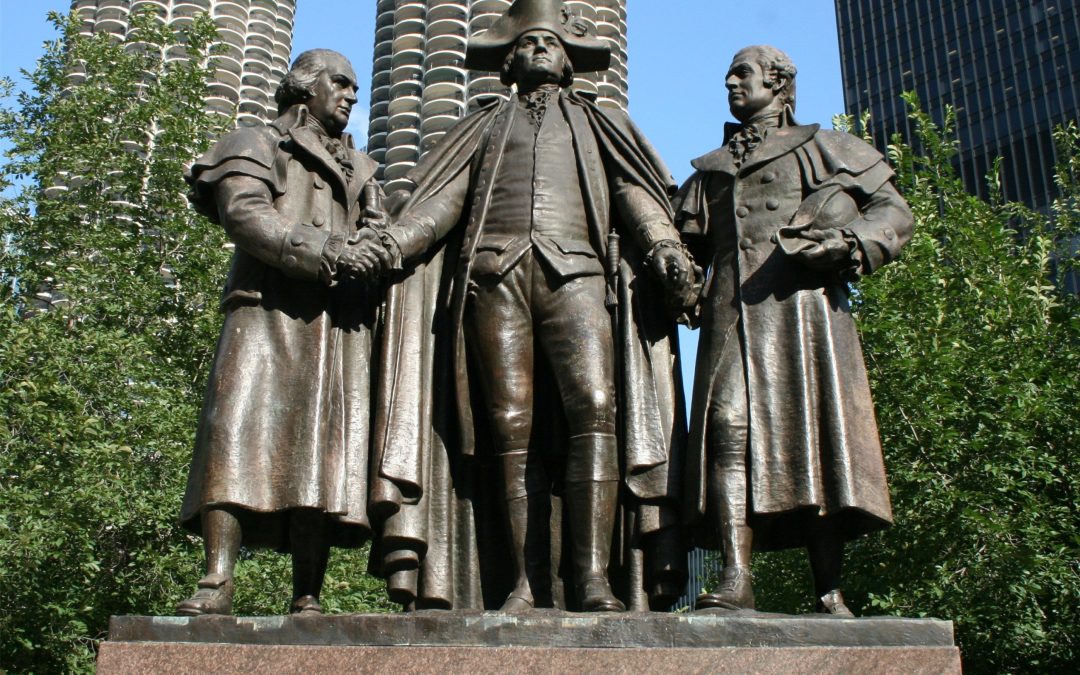 This statue was unveiled in Heald Square on December 15, 1941, the 150th anniversary of the adoption of the Bill of Rights. It shows George Washington in his Revolutionary War uniform shaking hands with English-born Robert Morris on his right, and Polish-Jewish emigre Hyam Salomon on his left. Morris, a banker and signer of the Declaration of Independence, and his colleague Salomon, are considered the major financiers of the American Revolution.

In addition to acknowledging the contributions of businessmen and individuals with different backgrounds to the Revolutionary effort, the monument stood as a refutation of Nazi ideology. The work was described as a “great triumvirate of patriots” by President Franklin Delano Roosevelt. First Lady Eleanor Roosevelt stated that it symbolized “a fundamental fact of American tolerance.”

A plaque on the base is inscribed with these words:

Symbol of American Tolerance and Unity and of the Cooperation of People of All Races and Creeds in the Upbuilding of the United States.

Robert Morris . George Washington . Haym Salomon
“The government of the United States which gives to bigotry no sanction – to persecution no assistance requires only that they who live under its protection should demean themselves as good citizens in giving it on all occasions their effectual support”
President George Washington 1790.

The back of the monument has a bronze image of Lady Liberty embracing a crowd of people of different origins.

(Heald Square is on S. Wacker Dr., at the Wabash intersection.)