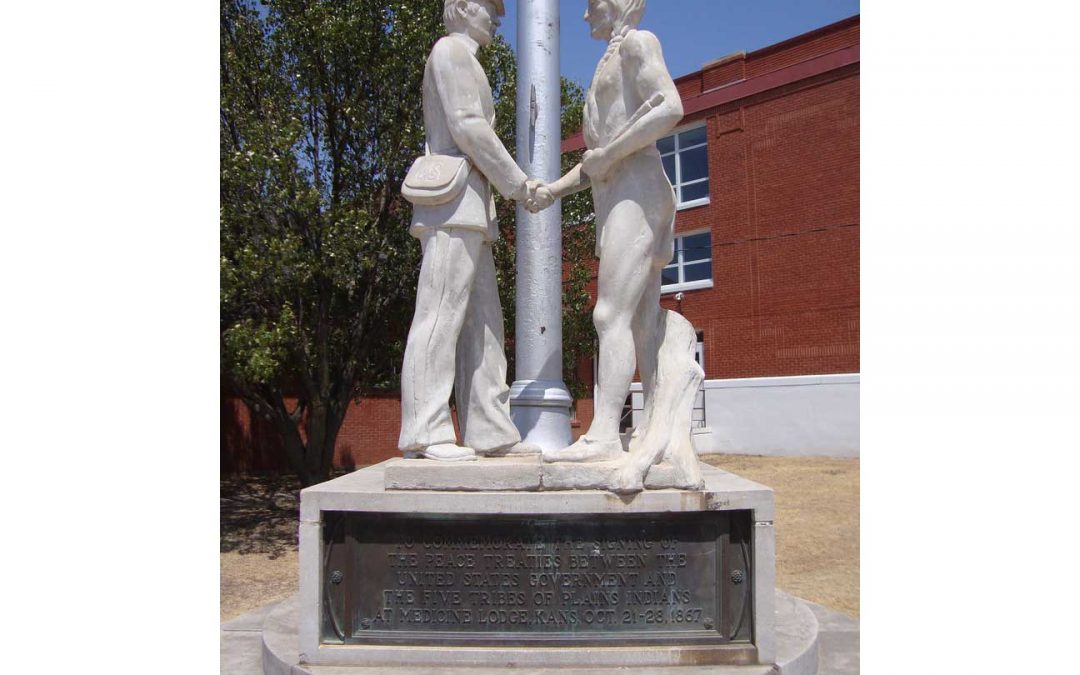 In October 1867 the US government signed a treaty with five Indian tribes– Kiowa, Comanche, Arapaho and Kiowa-Apache and Southern Cheyenne — to put an end to years of bloody fighting on the Great Plains. This statue, erected in 1927, commemorates that treaty.

That’s the simple story. The reality is much more complicated.

Westward expansion surged after the end of the Civil War. Men began taking advantage of the 1862 Homestead Act, which granted 160 acres to western settlers who worked the land for five years. In 1865 the US government passed the Pacific Railroad Act, funding a transcontinental railroad which cut across the plains. Between 1860 and 1870 the population of Kansas was to increase from 107,206 to 364,339.

The clash of civilizations between the nomadic Indians and the farming/ranching settlers was inevitable. It was most visible in atrocities like the 1863 military expeditions that attacked a Yanktonai encampment at Whitestone Hill, killing at least 300 men, women and children; the 1864, cavalry attack a group on the Cheyenne and Arapaho in Sand Creek, Colorado, killing more than 150 women and children; and just a few months earlier in 1867, the burning the nearby Cheyenne-Oglala village of Pawnee Fork in Kansas. The Battle of Little Big Horn, in South Dakota, was in June.

“If fifty Indians are allowed to remain between the Arkansas and the Platte [Rivers] we will have to guard every stage station, every train, and all railroad working parties… fifty hostile Indians will checkmate three thousand soldiers.”

Both sides, when they assembled in Medicine Lodge with their large entourages, were motivated to negotiate peace. The Indians agreed to move to reservations in Oklahoma in exchange for money, food, arms and what was essentially the training and equipment they would need to transition from their nomadic existence to settling into a fixed location. They retained some rights to continue to hunt the buffalo. Looking at this through our 21st Century eyes, it is ethnicide, the obliteration of a culture. It was doomed to fail, and so it did. The treaty didn’t hold for a year.

The city of Medicine Lodge first expressed interest in a pageant in 1917, but any progress on this idea was delayed by World War I. In 1926, the newly formed Medicine Lodge Indian Peace Council Treaty Memorial Association invited Kiowa Chief I-See-O, 18-years-old at the time of the treaty 60 years before, to Medicine Lodge to locate the exact spot of the signing of the 1867 Peace Treaty. The city’s intent was to hold a pageant every five years to celebrate the treaty. The Lion’s Club funded the travel of for 250 Indians from the Comanche, Kiowa, Prairie Apache, Arapaho and Cheyenne for the pageant.

Today, Medicine Lodge is a 400-acre Memorial Peace Park that overlooks the Indian campgrounds and treaty-signing site. Since 1927, at 5-year (now, 3-year) intervals, Medicine Lodge citizens have presented the pageant depicting the treaty signing and later settlement. The Centennial Pageant includes as many as 1,200 participants, including several hundred descendants of the Plains Indians who had gathered there a century before.

So why are the people of Medicine Lodge celebrating a failed treaty?

Part of the answer probably lies in the example of the Civil War 50th anniversary commemorations, held just a few years before the city fathers of Medicine Lodge had their initial idea. The Mananas National Jubilee of Peace in 1911, commemorating the First Battle of Bull Run, was opened by President Garfield and drew 10,000 attendees. Two years later, 55,000 veterans joined hands at Gettysburg. There was also a certain sense of urgency to capture this history while there were still people alive who had first-hand memory of it. Recall that Chief I-See-O, brought in to identify the actual treaty site, was almost 80 in 1926. The entire enterprise was wrapped in boosterism, a civic philosophy that reached its peak in the 1920s, that aimed to advertise towns and cities, promote economic development, foster tourism, and increase civic pride. This was made clear by Kansas Governor Ben Paulen, written for a 32-page commemorative edition of the Barber County Index in 1927:

As we look out on this great Plains country today, which is central and western Kansas, we can better appreciate and understand the blessings we enjoy, and the marvelous results of the Peace Council of sixty years ago. It is a great step from savagery to civilization. It is a picture of prosperity, of happy homes, of growing cities and towns, of schools and churches adorning the peaceful valleys and crowning the hilltops in every community. In no other region of America has there been such marvelous transformation in everything that makes a country great, or that inspires its people with a larger measure of happiness and hope. We come together today to celebrate this sixtieth anniversary of peace with the Indians and to rejoice in the wonderful progress made in educational and material development.

Did it work? The town of Medicine Lodge, roughly 90 miles southwest of Wichita, was founded in 1873 and now has a population of about 2,000. It is the country seat of Barber County and its other claim to fame is that it the place where Carrie Nation, in 1900, started her saloon-smashing crusade against the sale of alcohol.